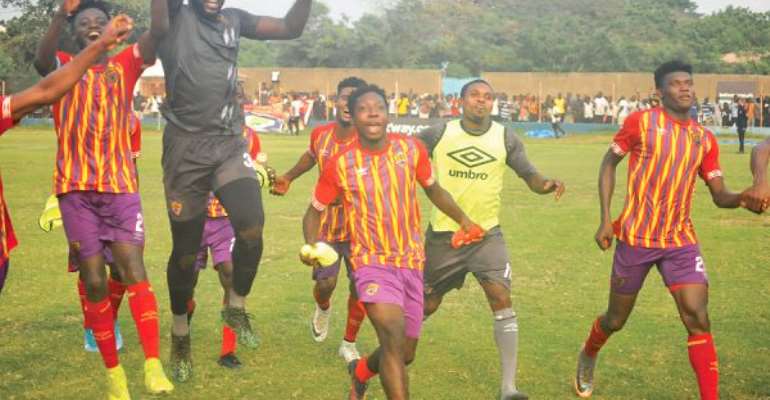 Hearts of Oak have yet to play a game in the 2020/21 season because some players and officials tested positive for the coronavirus pandemic, leading to the postponement of their opening match against Aduana stars.

The Phobians have since been cleared to participate in the League following further tests carried out by the Ghana Health Service.

On Tuesday, November 24, 2020, Hearts of Oak will get their season underway with a game against one of their long-standing rivals, AshantiGold SC at the Accra sports stadium.

As title contenders, matches between the two teams are always tough. The miners began their campaign with a 2-2 drawn game against Karela United on Match Day One and will fancy their chances against the Phobians.

They also recorded an improved performance against WAFA at the Red Bull Arena to draw goalless with the Academy side.

Today, Hearts of Oak have lost some sparkle upfront due to the departure of Kofi Kordzie, Bernard Arthur and Joseph Esso. But Coach Edward Odoom would look up to returnees, Nuru Sulley, Patrick Razak and youngster Afriyie Barnie to make the difference this season.

Hearts have also recruited former MTN FA Cup top scorer Abednego Tetteh but the former Bechem United hitman will not play a part in Tuesday’s game as he continues to recover from an illness.

In midfield, Emmanuel Nettey and Frederick Ansah Botchway who joined last season are expected to carry on from where they left off.

AshantiGold are not too different from Hearts of Oak in terms of player departure having lost a considerable number of players in the summer transfer window. However, the miners still look formidable despite the departures. The signed Empem Dacosta, Atta Kusi, Yaw Annorl and Hans Kwofi.

The exit of Shafiu Mumuni, Yussif Mubarik, Latif Anabila, James Akaminko and Eric Donkor may have taken a bit of shine away from the miners but they still have players who have the pedigree to stand any test.

The game is scheduled for 18:00 GMT kick-off at the Accra Sports stadium.