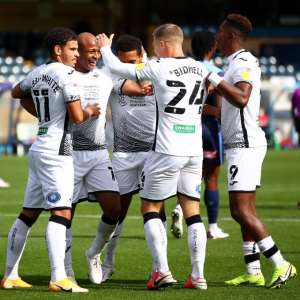 Ghana captain, Andre Ayew has registered his first goal of the season in Swansea City 2:0 win over Wycombe Wanderers on Saturday afternoon.

The Swans were hosted at the Adams Park. However, Andre scored the first goal in the 13th minute before assisting Jamal Lowe's goal in the 23rd minute.

Last season, he had an incredible campaign with Steve Cooper's side where he managed to score eighteen goals in all competitions.

The 2:0 win leave Swansea City at the top of the Skybet Champions table with 7 points.

Ayew is having a contract with the Liberty Stadium outfit until summer 2021 but he is expected to leave before the transfer window ends.