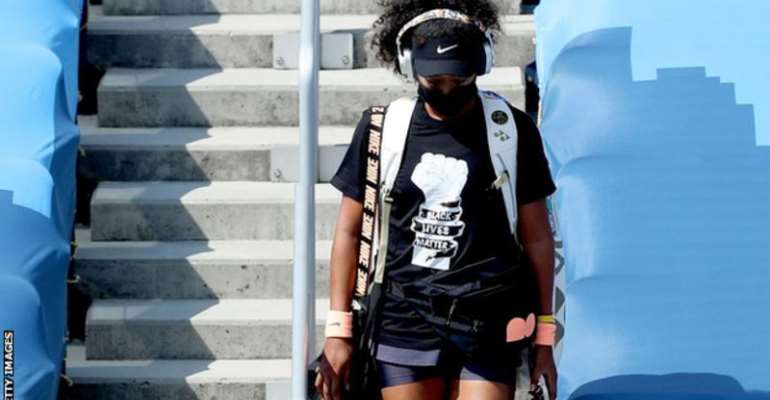 Naomi Osaka says she realised she would have to "take the first step" in protesting against racial inequality and "create awareness in the tennis bubble".

Japan's Osaka initially pulled out of her semi-final at the Western and Southern Open because "as a black woman I feel there are much more important matters at hand".

Tournament organisers then suspended play in New York on Thursday, one of a number of sporting events in the US to do so in protest at the shooting of Jacob Blake - a black man who was shot seven times in the back by police on Sunday in Kenosha, Wisconsin.

"I honestly didn't even think it would be that big of a deal," said Osaka, who wore a Black Lives Matter t-shirt as she walked on to court.

"I always thought it would be nice if someone started in tennis. I'm more of a follower. I was waiting and waiting and then I realised I was the one who was going to have to take the first step.

"I just wanted to create awareness in the tennis bubble. I think I did my job, I guess."

The 2018 US Open champion, playing in her first tournament since January's Australian Open, said after her win over Mertens: "For me it's been a little bit stressful, I couldn't really sleep last night so I'm really glad I was able to play at a pretty good level.

British number one Konta, 29, had started well at Flushing Meadows against two-time Grand Slam champion Azarenka, breaking serve early on before narrowly missing out on doing it again to close out the set, eventually winning it on her eighth set point.

She quickly found herself a break down in the second set though, with three of the opening four games going against serve.

Azarenka, 31, eventually levelled the match with another break to take it into a decider.

From there the former world number one controlled proceedings, twice breaking Konta's serve.

"I think it was a really good, high-quality match overall," Azarenka said. "I think Johanna played really, really well. Especially in the first set, she was really taking a lot of chances, and some of the opportunities that I had I didn't maybe go enough for them. But she was really, really strong.

"I felt that in the second set I was able to manage those opportunities better, step up a little bit. And then in the third set I felt like I was more in my pace and doing what I wanted to do, so I felt more comfortable."

If Azarenka beats Osaka, it will be her first WTA singles title since April 2016. Since then she has given birth and had time away from the tour because of a custody battle over her son, Leo.

The Western and Southern Open is usually held in Cincinnati but was moved to New York to create a two-tournament safety bubble that also incorporates the US Open, which starts on Monday and is the first Grand Slam since the sport was put on hold by the coronavirus pandemic.