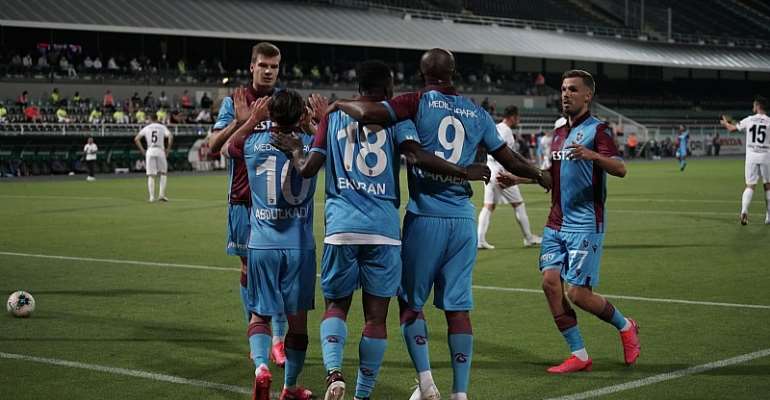 Ghanaian international Celeb Ekuban was in action on Monday night and managed to score for Trabzonspor in their 2-1 defeat at the hands of Denizlispor in the Turkish Super Lig.

Facing off in a crucial Matchday 32 fixture at the Denizli Ataturk Stadium in the ongoing 2019/2020 season, both clubs hoped to come out victorious in their quest for a strong finish to the campaign for different reasons.

A strong start to the game produced the first goal of the day on the 14th minute when attacker Caleb Ekuban scored with an assist from Abdulkadir Omur.

Despite creating a few more chances in the first half, the away team could not add to their goal and went into the break with just the 1-goal lead.

A minute into the second half, Denizlispor shocked Trabzonspor by drawing level through an equalizer from Hadi Sacko after he was assisted by Recep Niyaz.

A pulsating encounter ensued between the two teams from there on but it was the home team that had the last laugh. A hard-fought battle from the team resulted in a second goal on the 84th minute scored by Oscar Estupinan.

Despite pushing to get something out of the match in the remaining minutes, Trabzonspor could not find a way through.

The defeat to Caleb Ekuban and his teammates is a setback to their chances of winning the Turkish Super Lig title at the end of the season.

The team is now 4 points behind league leaders Istanbul Basaksehir and will need to win all remaining 2 matches of the season and hope the team above drop points.