Eddie Nketia On Target As Arsenal Win 2-0 Against Southampton 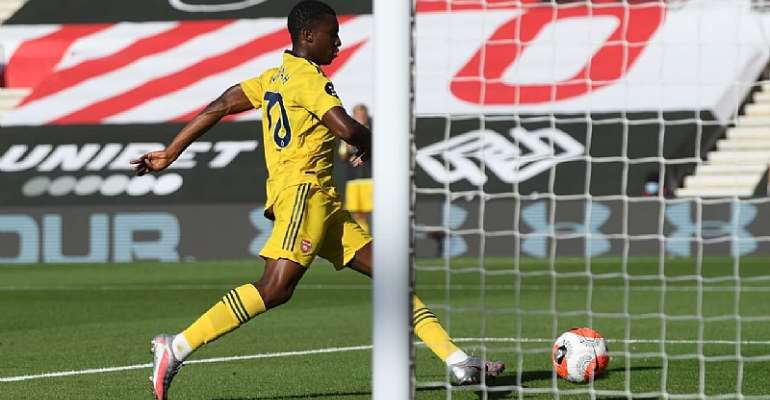 Youngster Eddie Nketiah was on target this evening to help his Arsenal side post an important 2-0 win against Southampton at the St. Mary’s Park in the English Premier League.

Lacking behind as far as securing qualification to play in Europe is concerned, the Gunners had to put up a good fight against the Saints today to enhance their chances of a Europa League competition next season.

Following a balanced encounter between the two teams in the first half, it took an awful blunder from the defense of Southampton for Arsenal to take the lead. A lurking Eddie Nketiah was served on a silver platter by a defensive mistake and made sure he punished the home team as he scored from close range.

In the second half, the visitors played better and managed to create some decent goal scoring opportunities. They were however stopped from scoring with Southampton coming close to scoring as well on a couple of occasions.

Finally, in the last 10 minutes of the game, Josep Willock scored the insurance goal of the game for Arsenal with the side going on to bag all 3 points at the end of the game.

This is Eddie Nketia’s 7th appearance for Arsenal after he was recalled from his Leeds United loan.

The striker who is of Ghanaian descent has 4 goals to his name this season after making a total of 24 appearances [Arsenal and Leeds United combined].