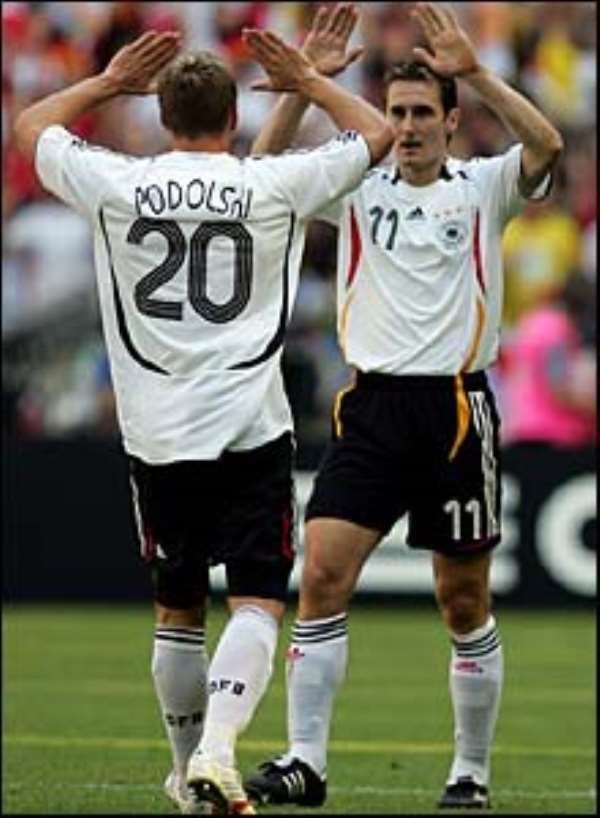 And Podolski finished smartly after Miroslav Klose's pass on 12 minutes.

Sweden's Teddy Lucic was sent off for a second booking on 35 minutes and their miserable day was complete when Henrik Larsson missed a second-half penalty.

It was an assured display from Germany, who always looked like adding to their lead after gaining the early advantage.

Both sides were still settling down when Podolski's goal sent the home fans at the Allianz Arena into raptures.

Michael Ballack created the opening as he found Klose, who turned his marker but saw the ball pushed away from his feet by Isaksson.

However, Podolski was on hand to slot in via a deflection off Lucic's head.

Larsson had an opportunity to level on eight minutes but shot into the side netting from inside the six-yard box.

He was left to rue his wastefulness four minutes later as Podolski was played in by a delightful pass from Klose before finishing with considerable assurance.

Unsurprisingly, the goals filled Germany with confidence and instilled their play with a real swagger.

And things got worse for Sweden on 35 minutes as Lucic received a second yellow card after being judged to have tugged Klose's shirt.

Referee Carlos Simon was surrounded by Germany players brandishing imaginary cards - and the Brazilian eventually did what they wanted as he waved the red, receiving a pat on the back from Podolski.

Zlatan Ibrahimovic's shot from a narrow angle was fumbled around the post by Jens Lehmann, while Mattias Jonson beat Lehmann to Larsson's cross only for Phillip Lahm to clear.

After the interval, Sweden were gifted a chance as they were awarded a penalty for an innocuous-looking challenge on Larsson.

The Barcelona player picked himself up, dusted himself down - and blazed way over the bar.

Ballack then shot from 20 yards only for Isaksson to produce another fine save, tipping the ball on to the post.

The pace, unsurprisingly, began to drop in the sweltering heat of Munich and the match lost much of its earlier fluency.

Indeed, they looked came close to increasing their lead as Schneider's 85th-minute drive was deflected by Tobias Linderoth on to a post, while substitute Oliver Neuville's shot was blocked.

Germany will face the winner of the Argentina-Mexico tie in the quarter-finals.

Snake rescues 15-year-old-girl from alleged kidnappers in Kr...
3 minutes ago