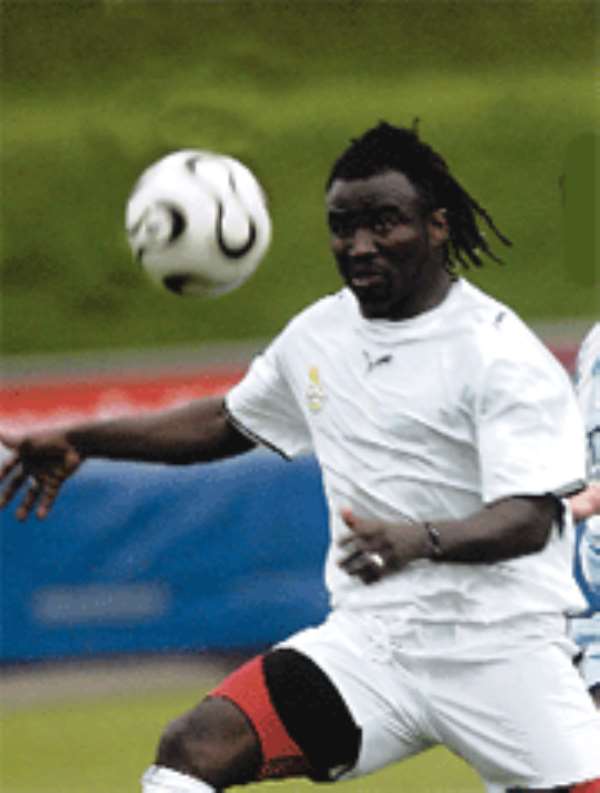 The Black Stars are leaving nothing to chance as they prepare to take on the USA tomorrow in what they have billed as the battle of Nuremberg.

The team quickly zoomed into training last Monday at their Wurzburg camp after their historic first World Cup victory over the highly-rated Czech Republic in Cologne last Saturday.

On this occasion, the training session attracted an unusual crowd of Wurzburgers anxious to catch a glimpse of "the little known African players", as they referred to the Stars, who have torn to shreds the revered footballing image of the Czechs.

But the Stars were least distracted by these as coach Ratomir Dujkovic and his Ghanaian assistants, Sellas Tetteh and goalkeepers' trainer, Edward Ansah, took their charges through the motions.

Areas of obvious concern which they strategised on were the roles of Sulley Muntari in midfield and Asamoah Gyan in attack, and the new players to take up their roles, since both Muntari and Gyan will be missed tomorrow as they serve the one-match ban for two-yellow-card offences.

Eric Addo and Derek Boateng in midfield, and Razak Pimpong and Alex Tachie-Mensah in attack were used alternately in the respective roles at the last training.

These roles were being fine-tuned at training at the time of going to press yesterday. The Black Stars have only the usa to beat tomorrow to make a memorable safe passage to the prestigious round of 16, the knockout stage of the competition.

But reports say the Yankees have thrown down the gauntlet with the aim to claiming their first victory too, and possible qualification.

After a miserable 3-0 loss to the Czechs in their opening match, the Americans held the Stars' 2-0 conquerors, Italy, to a scrambled 1-1 draw to throw the qualification race in the group wide open.

For tomorrow's game, the Stars will appear in their second outfit, the red jersey, even though they are supposed to be the home team.

Explaining why it will be so, the Chairman of the Black Stars Management Committee, Fred Pappoe, said this was to avoid a clash of colours since the USA, as the away team, would also appear in their second jersey colour, white.

Aside from that, the competition's department of fifa has mandated all teams to appear at least twice in their registered first colours and once in their second colours for the group stage of the tournament.

He said both Ghana and the usa had satisfied this by playing twice in their respective first colours and, therefore, a request by Ghana to use the first colour (white) again as the home team was turned down.

This is because if granted there will be a clash with that of the Yankees who must necessarily appear, as the rules specify, once in their second colour and also being the away team in tomorrow's game, the last in their group qualifiers.