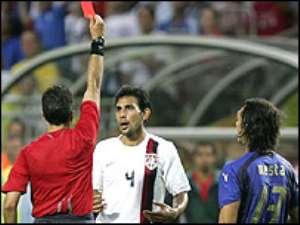 USA held on for most of the second half with nine men to earn a gutsy draw with 10-man Italy in an enthralling match.

Italy went ahead when Alberto Gilardino headed home Andrea Pirlo's free-kick, before USA levelled soon after thanks to Cristian Zaccardo's sliced own goal.

For only the fourth time at a World Cup three men were sent off, Daniele De Rossi for an elbow, Pablo Mastroeni for a foul and Eddie Pope for two bookings.

Kasey Keller made a series of saves as USA held on to leave Group E wide open.

A point was the least USA deserved after a display full of spirit and determination in Kaiserslautern.

If Ghana's brilliant win over Czech Republic earlier in the day opened up the group, USA looked in the mood to create the second real shock of the day.

They set about their more illustrious opponents with vigour in the early stages, pinning Italy back, with Bobby Convey and Clinton Dempsey both just missing the target.

But, as they began to take control, the Italians produced a classic sucker-punch.

They won a free-kick down the right, Pirlo crossed with precision and Gilardino stooped to head past Keller from eight yards.

USA refused to buckle, however, and two moments of madness inside a minute turned the game in their favour.

They equalised through Zaccardo's horror own-goal, the full-back incredibly slicing a left-footed clearance past Gianluigi Buffon and into the net.

Seconds later, De Rossi disgraced himself with a sickening, needless elbow on Brian McBride and was given his marching orders.

It was the undoubted low point of a World Cup that has tried so hard to entertain.

Italy took off Francesco Totti and brought on Gennaro Gattuso and adapted well to a 4-3-2 formation, though Mastroeni's 35-yard piledriver gave them a scare when it rippled the top of Buffon's net.

Moments later, Mastroeni was off too. His two-footed, reckless lunge on Pirlo was deserving of a red card and left referee Jorge Larrionda with little option.

If Larrionda was expecting a quieter second half, it did not last for long.

Pope slid through Gilardino and was handed his second yellow of the evening, as USA were unbelievably reduced to nine men.

Carlos Bocanegra headed onto his own crossbar, but USA were brave enough to counter-attack when they could, McBride slicing a left-foot shot wide.

They thought they had gone ahead when substitute DaMarcus Beasley lashed in from 15 yards, but McBride was adjudged to have been standing in an offside position.

Any neutrals in the crowd would have been sympathetic to USA's plight and they will have celebrated as Kasey Keller pulled off a wonder save to claw away Alessandro Del Piero's close-range toe-poke.

Italy pressed but they could not break USA's resolve and the Americans claimed an extraordinary point to kick-start their World Cup campaign.