Ghana Is On Course To Lose A Winnable Battle In Covid-19 Unless... 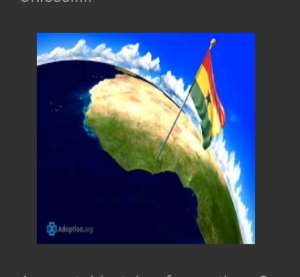 An untold tale from the Suma Ahenkuro's exploits in battles to safeguard the Adinkrah Symbols is a story of these uncelebrated twin brothers from Goka who were enlisted to defend the Sumaman palace against invaders who were to intrude and plunder on the priced symbols that define Bonoman, Ghana and Africa today.

The twin brothers from Goka, though heroes on their own merits are not known to history books about great wars ever fought in human history because they couldn't defeat their biggest enemy, which was enmity amongst themselves, two brothers from one womb.

Such sworn enmity between the twin brothers is stretched to their progenies, from the youngest to the oldest. Though they shared one compound in their father's estate, the brothers' daily battles to superiority that determines who inherits their father's chieftaincy title as Adontehene, or Chief Warrior for the famous Nana Adinkrah, when the father pass on, meant they talked to each other in the public eyes, but it's false and dissembling.

The wives and children of the senior of the twins were enemies also to that of the junior twin.

The assignment they have now been enlisted to undertake was sanctioned by the urgent call from the Nana Adinkrah, the Chief then for Sumaman. Word has reached his hearing that some Dwira people from Ivory Coast were approaching on the palace's safe to steal the Adinkrah Symbols, otherwise known as the Gye Name Symbols. None of his warriors is apt for the battle to safeguard these precious symbols that taught wisdom to his subjects than the two brothers from Goka, a chieftain under Sumaman.

With haste, learning the promises in there to have, their statues erected to immortalise them if they defeat the thieves, loaded with gold on their return home; the twin brothers dressed up for the battle. Before they left their homes, they reminded their individual families how the other is not to be tolerated or even mingle with. The enmity should continue.

Heavens were good to the twin brothers. With their masterful tactics in battles, they executed the business they were about to perfection. The heads of the robbers were served on a trail to Nana Adinkrah in his palace with pump and jubilations.

Nana Adinkrah barely pronounced his blessings on the twin brothers than emissaries of bad news reached the palace that: back home, the families of the twin brothers have all died. Not by foreign aggression or through natural cause, but by the fiendish doings of their ownselves. They in turns poisoned their drinking pots.

The crime was done coincidentally as seen in the proverbial Mouse and the Cat issue. As the first family planned poisoning the other, so did the second family poured same content of toxins in the first family's drinking pot.

The news was not taken as one that should end the brothers' enmity, but they turned their victorious swords on their own kind.

They died in instant stabs before their rewards.
Till today, they're not celebrated in Sumaman, not also in Goka, their nativity.

Users of the Adinkrah Symbols in artworks even don't know anything about them.

These two twin brothers and their uncelebrated history represent the divisive partisan nature of Ghana's latter day polity in times of pandemic, a battle against coronavirus, Covid-19.

The incumbent New Patriotic Party (NPP) and the biggest opposition party National Democratic Congress (NDC) have relegated to the background the important business to safeguard the lives of the vulnerable Ghanaians against the lethal virus, but battling for superiority, who should be crowned with Ghana's crown post Covid-19.

Today, the NPP will not get to the battle front, but drumming praise songs that calls for dancing of their faithfuls, and mournful to the supposed enemies in the opposition. It's not different also from the camp of the NDC.

The country is no more celebrating the Ghanaian inventors who are coming out with ventilators, test kits, sanitisers, Veronica buckets, and nose masks to battle the virus. The two leading political parties are not encouraging debates in the media on how we can build on the prototypes and market the products for the needed growth of the economy.

The debate is now focused on who built or did not build hospitals for the country.

It's now: "is it important to build additional hospitals or continue the existing unfinished ones".

Our swords are turned to our own flesh with retributions and nemesis in times of crisis, one that demands a common front to battle a common enemy.

This Covid-19 fight is a winnable battle to Ghana, judging by the heaven's grace on us, limiting its lethality on our shores as compared to the developed countries in Europe and America. Yet, the enemy which is not an outsider, but the bossy name making titles is blunting our swords when the battle is intense.

The One Ghana Movement (1Gh) I lead, learning how the status quo could bring Ghana on her needs under the ravages of this pandemic, is reiterating to the Ghanaian people that: "these two fathers of ours are taking their enmity to the height that would make our land desolate in the face of this invisible enemy. It's time we make unappealing their old tactics that have for far too long held back our progress vis-à-vis our bequeathed resources. Let's take back our republic, and chauffer her to the promised land."

That could only be realised when we hoist and rally behind the patriotic Ghana flag.