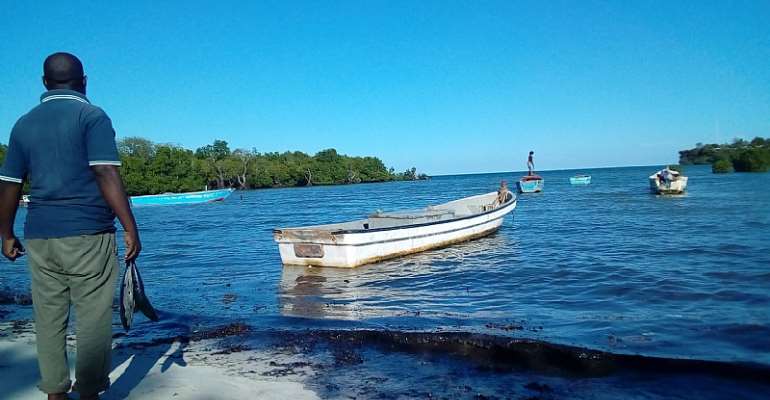 As Kenya continues to implement dusk to dawn curfew as well as travel restrictions into and out of counties most affected with corona virus cases, local fishermen in coastal Kenya are counting looses.

Most fishermen say they used to exercise their fishing during night when the deep waters of Indian Ocean are calm, but for now the government directives have made it impossible due to availability of ocean security patrols.

Ali Shamba a local fisherman in Mtwapa area of Northern coast of Kenya says the night curfew has had a great effect to his job that he depends entirely for his livelihood.

Ali said he has an eyesight complication that makes him practice night fishing, and since then his daily catch has reduced drastically.

“if government will continue implementing the dusk to dawn curfew that was imposed to curb spread of corona then this will really affect us, you know people like me we normally go fishing in the night, I cannot fish during the day because the sun rays affect my eyes, and you see whatever we catch from the ocean for now cannot sustain our needs,” Said Ali.

He added that for him to fit in the gap, he has been forcing himself to fish during the day so as to earn a living for him and his family.

He further says there are a variety of fish species that his customers prefer most especially the ones he catches during the night, and this directive has made him loose his loyal customers.

“I have been asking my friends to accompany me during the day, I am not sure if there are police officers patrolling the waters in the night, am afraid of being arrested, the other thing is we have noticed an increase of customers but some are those who prefer the type of fish we catch during night hours, but we don’t get them any more, and this is a disappointment to our clients,” Ali added.

Abdhala Ule Alii is another local fisherman in the same are of Mtwapa in coastal Kenya, he said he has not been making any sales of his daily catch as may fish vendors come on the shores very early before he finishes fishing.

He says many vendors who are women, are afraid of caught up during the curfew hours which has also force them adjust their hours of selling fish, initially it was from 6 pm to 11 pm targeting those who come late from job.

“We are suffering a lot, when we are done fishing we don’t get any customers at all, they come very early and go home before us because of the corona virus directives, I urge the government to allow women who sell fish to be allowed to go on with their business to help their families,” he said.

He said the price of fish has gone down drastically for now and they have so many needs to meet like fueling boat engines and paying boat owners thus affected by the situation.

“without these fish vendors we are nothing here, their business has been affected too, there is no one to purchase fish from these women because people go home early to avoid the curfew hours, am afraid most of these women might turn into prostitution because they can not meet their needs, government should look into this matter,” he added.

Mwanaidi Suleiman a fish vendor says she now buys half of her normal purchase she used to take from fishermen, she says the spread of corona virus has changed lifestyle of many people and even some of her customers are afraid of making purchases implicating the virus in invisible and everywhere.

Mwanaidi says Kenya’s economy has been hit hard by the pandemic and government by putting the measure is not only to press hard business people but for better health of the nation.

“Most of our fishermen here no longer go fishing at night, they are afraid of arrested by marine police after the night curfew was imposed by government, our customers too are afraid of coming out during night hours to buy fish, we are really affected but we know the government is doing this to protect us from the virus as our economy is affected,” said Mwanaid.

Brigadier Vincent Naisho, the director general of Kenya Coast guard, said that government is very keen monitoring any vessels coming into the country via the Indian Ocean through the port of Mombasa.

Naisho said officials from the coast guard department will be putting surveillance into the coastal waters as a way of curbing the spread of the virus into the country as well as implementing the government directives.

“At the moment through a joint operation center we have come up with a strategy to deal with the corona virus that has afflicted so many parts of the world and we are monitoring very closely to ensure we are able to cluster ships based on the risks basis,” said Naisho.

According to Joseph Gitonga the head of Mtwapa beach management unit, the dusk to dawn curfew has affected the business and the government should come up with measures they will secure local businessmen survive during these trying moments of Covid 19 pandemic.

He says many cannot afford their daily bread as they used to do and if the situation will go on for a long time, many will suffer especially the low-income earners.

“In my opinion, if the government is preventing the spread of covid 19 viruses, it should as well fund those people whom their business were affected by the health directives before the virus ends, we don’t have any business for now, our fishermen cannot go fishing as they used to do, women fish vendors are also not making any sales due to the imposed curfew which begins from 7 pm to 5 am daily,” said Gitonga.

Up to April 23rd, the number of coronavirus cases in Kenya had risen to 320, as the government warns those flaunting those violating the dusk to dawn curfew will be arrested and subjected to mandatory 14 days quarantine at their own cost as a way of curbing the spread of coronavirus.