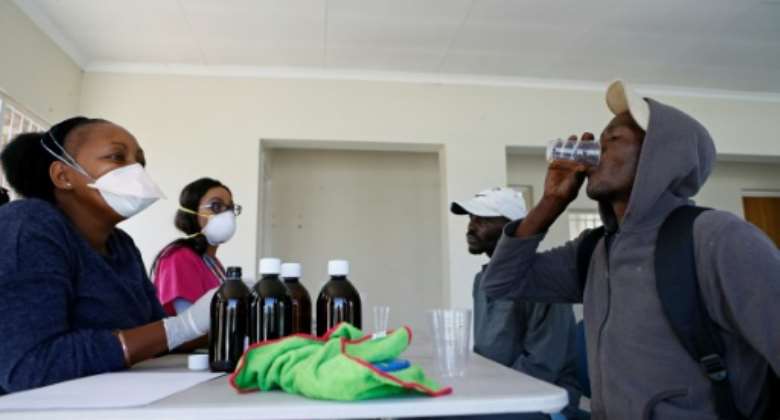 Most of the 89 men at the shelter are being treated for heroin addiction for the first time. By Phill Magakoe (AFP/File)

When South African graphic designer Jimi was expelled from a drug rehabilitation centre last month, his exasperated mother refused to let him back into the house.

That night, the 25-year-old joined the hundreds of heroin and methamphetamine addicts sleeping rough in South Africa's administrative capital Pretoria.

Resigned to squatting in an abandoned building, Jimi was picked up just four days later by policemen enforcing a coronavirus lockdown.

Authorities eventually took him to a church-run shelter in Pretoria's northern Akasia suburb set up at the start of the lockdown for homeless substance users.

"I have finally found a place to heal myself," Jimi said, reflecting on the hardship brought by years of addiction to crystal meth.

Most of the 89 men at the shelter are treating heroin addiction for the first time with methadone administered by Pretoria's community oriented substance abuse programme (COSUP).

Over 600 people have joined the methadone programme since South Africa went into lockdown on March 27, roughly doubling COSUP's number of patients.

"The lockdown gave access to many people who would not have done it before," said COSUP head Jannie Hugo.

The majority of newer faces are street dwellers who suffered withdrawal symptoms after they were placed in shelters. Others were driven to rehab by a disruption in drug supplies caused by the shutdown.

"Drugs were not readily available on the streets," said Graham Krugur, 34, as he awaited his daily dose of methadone after breakfast.

"So I voluntarily went to the first shelter I knew of," he explained. "Withdrawals are very painful... some people say even their bones get itchy."

Homeless and on heroin for the past three years, Krugur admitted starting methadone "because of the lockdown".

"I am actually glad COVID-19 happened," he told AFP, diligently washing his hands before taking his place in line.

"I am now trying to reduce and see what happens if I go off the programme, if I can cope."

A health professional sprays disinfectant on a homeless man's hands before he queues for a dose of methadone. By Phill Magakoe (AFP/File)

One after another, the men filed into a wooden shed where a nurse carefully measured out the orange opioid liquid in plastic cups.

Most had changed out of their tattered street clothes into blue overalls donated by the municipality. They wore cloth face masks and carried hand sanitiser.

After swallowing his dose, Krugur decided to phone his mother for the first time in years.

"My family withdrew from me," he explained. "I started stealing and robbing people."

Site manager Lucky Shokane said the group had been "clean" for almost three weeks and that some were starting to reduce their methadone intake.

"The positive effect of the lockdown is that we have a controlled environment to assist them to regain their lives," he told AFP.

After a rocky start, Shokane said the men overcame the side-effects of methadone and grew accustomed to each others' company.

They busied themselves around the garden, re-painted walls and helped in the kitchen.

"Being around other recovering substance users here motivates me," said Jimi, who did not wish to use his real name.

"We all have two things in common: drugs and homelessness," he added. "We try to beat them together."

Data on substance abuse is limited in South Africa, although the country has been identified as one of the largest markets for illegal drugs in sub-Saharan Africa by the US State Department.

Many urban street dwellers inject themselves with an extremely addictive concoction of heroin, marijuana, anti-retroviral drugs and rat poison known as "nyaope".

Shokane said the lockdown had revealed the scale of substance abuse in Pretoria.

He said local authorities were discussing ways to continue caring for methadone patients once restrictions were rolled back -- a move set to gradually begin next month.

"We need a place where we can shelter them even after the lockdown," Shokane said.

"A safe and secure site where they can continue the programme... learn skills (and) find jobs."

Many street dwellers inject themselves with an extremely addictive concoction of heroin, marijuana, anti-retroviral drugs and rat poison. By Phill Magakoe (AFP/File)

But plans for a fresh start are likely to be delayed by the steady spread of the virus in South Africa.

To date the country has recorded 3,953 coronavirus cases -- the highest in Africa -- and 75 deaths.

Health experts fear outbreaks among the most vulnerable, and the weakened bodies of methadone patients are at high risk.

Eight of the men at Akasia shelter have had to be tested for coronavirus after developing flu-like symptoms.

"It's a big concern for me," said Nieuwenhuys, 33, who has been grappling with "nyaope" addiction since childhood.

"I'm scared for my life and I've got children to go back to, especially now that I'm clean."

Shokane admitted that a coronavirus outbreak at the shelter would be "devastating" and likely to offset the methadone programme.

"There is no space in town or hospital that can cater for them," Shokane said.