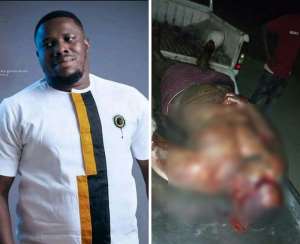 The Ghana Police Service has announced that Vincent Adjei, the alleged ring leader in the murder of Mr Mawutor Adzahli, the Assembly Member for the Sogakope South Electoral Area has been remanded into prison custody by the Dabala District Court.

"The suspects were arrested from different locations across the country".

It would be recalled that on March 1, 2020, Mr Mawutor Adzahli was murdered in his house by unknown assailants.