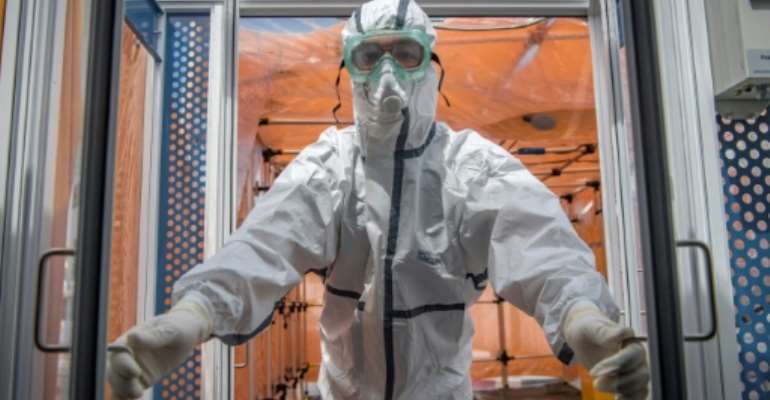 A medic at the Mohammmed V military hospital, wearing a protective outfit, is pictured during the novel coronavirus pandemic crisis, in the Moroccan capital Rabat. By FADEL SENNA (AFP)

Morocco's army has mobilised all its resources to help the health system tackle the coronavirus pandemic, beefing up facilities for a possible mass influx of patients, the military's chief medical officer said.

"The crisis has prompted us to reinforce medical teams so that there is proper care" as well as improving available equipment, Colonel Zbir El Mehdi, the chief doctor at Rabat's military hospital, told reporters during a guided tour this week.

Military hospitals have been reordered to maximise bed capacity, he said, adding that two field hospitals had been deployed to the coastal Casablanca region.

Medical teams have been sent to 45 areas across the country, he added.

"We still have the situation under control," he said.

Rabat's military hospital, considered the country's most modern, has treated several African heads of state in the past.

Morocco had recorded 2,528 confirmed cases of coronavirus and 133 deaths as of Friday, while over 270 have officially recovered.

The North African kingdom has closed its borders and imposed a lockdown, enforced by security forces, to stem the spread of the disease.

Mankarigu Health Center temporarily closed down after attack...
16 minutes ago