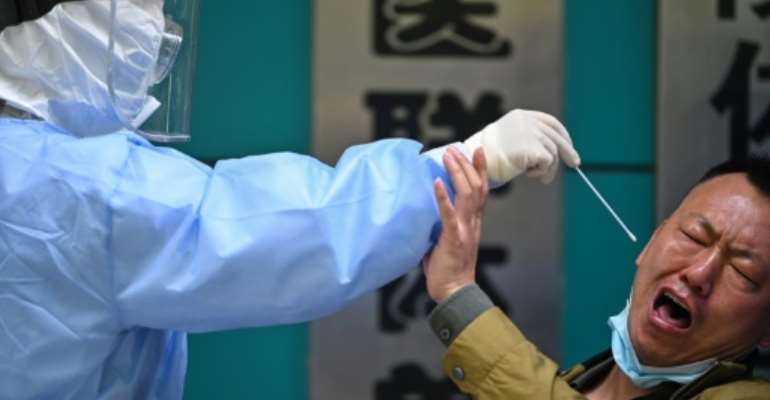 A man is tested in Wuhan, the Chinese city where the coronavirus first emerged. By Hector RETAMAL (AFP)

The Chinese city where the coronavirus first emerged raised its death toll by 50 percent on Friday, revealing the ground zero of the global pandemic had been much worse hit than Beijing had previously reported.

The revision came as a growing chorus of world leaders suggested China had not been entirely open about the full domestic impact of a virus that has killed more than 140,000 people globally and confined half of humanity to their homes.

A healthcare worker holds the hand of a COVID-19 coronavirus patient in the Intensive Unit Care of the Povisa Hospital in Vigo, northwestern Spain. By MIGUEL RIOPA (AFP)

It also followed US President Donald Trump ordering a cautious easing of lockdown restrictions in an effort to kickstart his stalling economy, and as GDP data revealed China's economy had slipped into reverse for the first time in decades.

In Wuhan -- where the virus was first detected late last year -- an official announcement raised the city's death toll by half, to a total of 3,869.

The additional deaths were cases that were "mistakenly reported" or missed entirely, the posting said.

The National Guard delivers food to some communities hardest hit by the coronavirus pandemic in Chelsea, Massachusetts. By Joseph Prezioso (AFP)

But the revision will play into a growing narrative of Chinese untrustworthiness led by Trump's nationalist administration.

That has now garnered support from Britain and France, fuelled by two US media outlets reporting suspicions the virus accidentally slipped out of a sensitive Wuhan laboratory that studied bats.

British Foreign Secretary Dominic Raab, deputising for Prime Minister Boris Johnson who is still recovering from the virus, said there would be "hard questions" for Beijing.

Workers dig graves for COVID-19 victims at a cemetery in Istanbul, Turkey. By BULENT KILIC (AFP)

French President Emmanuel Macron told the Financial Times it would be "naive" to think China had handled the pandemic well, adding: "There are clearly things that have happened that we don't know about."

Beijing and Moscow slapped down the attacks, with Russian President Vladimir Putin denouncing "attempts by some people to smear China."

World leaders are grappling with the question of when to re-open society, seeking a life-and-death balance between unfreezing stalled economies and preventing a deadly second coronavirus wave.

A staff member at a retirement home in Thises helps a resident on the 31st day of a strict lockdown in France. By SEBASTIEN BOZON (AFP)

While Trump declared Thursday the time had come for the "next front in our war" with a phased re-opening of the US, others took the opposite path -- Japan, Britain and Mexico all expanding current restrictions.

Despite the United States suffering a staggering 4,500 deaths in the last 24 hours -- taking the national toll to almost 33,000 -- Trump proclaimed: "We're opening up our country."

The president's approach was more cautious than previous hopes for a sudden re-opening however, with state governors given the lead.

A guard stands at the entrance of the emergency room of a hospital in Santo Domingo, Dominican Republic. By Erika SANTELICES (afp/AFP)

Lightly affected states can open "literally tomorrow," said Trump, while others would receive White House "freedom and guidance" to achieve that at their own pace.

Top US government scientist Anthony Fauci said: "Light switch on and off is the exact opposite of what you see here."

In New York state for example -- where more than 11,500 have died -- Governor Andrew Cuomo extended a shutdown order until May 15.

A policeman stands inside a 'disinfectant tunnel' in Amritsar. By Narinder NANU (AFP)

"Why does the economy matter if we're not around to spend any money because we're all sick?" the 31-year-old told AFP.

The shutdown was "stressful" but "you just have to roll with the punches... That's what New Yorkers do."

Meanwhile, there were more and more signals of the global economy imploding.

An NHS staff member wipes her eyes as she holds a sign to thank British veteran Captain Tom Moore, who raised over 13 million pounds for the NHS, as they take part in a national "clap for carers" in Liverpool, north-west England. By Anthony Devlin (AFP)

China's reported Friday its gross domestic product shrank 6.8 percent in the first quarter of the year.

That is the first contraction since quarterly growth data became available in the early 1990s.

In the US, another 5.2 million workers lost their jobs, bringing the total number of newly unemployed to a staggering 22 million since mid-March.

A member of a privately-funded NGO fumigates and disinfects the streets and the stalls at Parklands City Park Market in Nairobi, Kenya. By LUIS TATO (AFP)

John Williams, a top official at the Federal Reserve, predicted it would take "a year or two" if not longer for the US to recover from what the International Monetary Fund has termed the "Great Lockdown" battering the global economy.

The virus could spark another "lost decade" in Latin America, the IMF warned, while experts cautioned that freezing debt for poor countries will not save many developing world economies.

Some European countries -- such as hard-hit Spain and Italy -- were embarking on a long road back to normality, with Venice residents strolling around quiet canals stripped of their usual throngs of tourists.

Switzerland, Germany, Denmark and Finland were among those gradually re-opening shops and schools although Britain, which shut down later than continental Europe, extended its lockdown for at least three more weeks.

A closed sign at Coolangatta Beach on the Queensland - New South Wales border in Australia. By Patrick HAMILTON (AFP)

In Poland, new rules requiring everyone to wear a mask outside received decidedly mixed reviews.

"My glasses are fogging up and I can't see a thing. But you have to wear it," she added.

Around the world, people have come up with ingenuous ways to bring back some semblance of normality to their upended lives.

Luciano Romoli, 80, runs a stretching class every day at noon for his senior neighbours who join him from their balconies in the northern Italian city of Turin.

"We got the idea, since we have to be stuck at home, to do some exercise, otherwise when it's over we'll be stiff, and a bit rigid," the energetic pensioner told AFP.