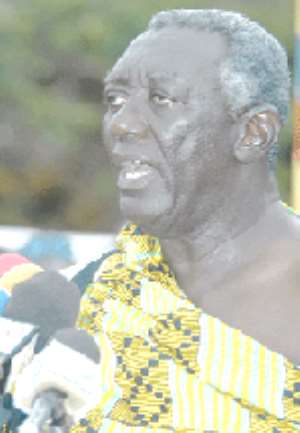 President J.A. Kufuor has called on Ghanaians to tolerate the views of one another, irrespective of political leanings and ideology, in order to sustain the country's fledgling democracy.

He also appealed to the citizens, especially political leaders, to eschew negative acts which could undermine the unity and peace which the country was enjoying.

The President made these remarks when he paid glowing tribute to the late Mr Ferdinand Kwabena Ofori Ayim, the Special Assistant to the Minister of Tourism and Diasporan Affairs, Mr Jake Obetsebi-Lamptey, at Mr Ayim's burial service at Kyebi last Saturday.

The late Mr Ayim died in a motor accident on the Anyinam-Bunso stretch of the Accra-Kumasi Road on Friday, April 7, 2006.

The funeral was well attended by people from all walks of life, including the Vice-President, Alhaji Aliu Mahama, the Okyenhene, Osagyefuo Amoatia Ofori Panin, Ministers of State, leaders of the political parties, such as the National Democratic Congress (NDC), the Convention People's Party (CPP), and the People's National Convention (PNC), the family and friends of the deceased.

According to President Kufuor, God, in his wisdom, created Ghanaians differently to be entitled to different political ideologies and affiliation which, he noted, was healthy for the country's democracy, adding that wisdom and ideas for administering the country should not be confined to one group of people.

He said the best way to express that was for the people to have different views on issues.

President Kufuor commended the main opposition party, the NDC, and other political parties for sympathising with the government and the family of the late Mr Ayim, whom he described as a man who worked for the unity of the country and the advancement of democracy.

He also appealed to the people to use Mr Ayim's death as the rallying point for the unity of the country to enhance the country's democratic dispensation.

The President, on behalf of the government and people of the country, expressed condolences to the wife and the family of the late Mr Ayim, as well as to the chiefs and people of the area, for the loss of such an illustrious son.

Earlier in a tribute read on his behalf by the Minister of Harbours and Railways, Prof Christopher Ameyaw-Akumfi, the President said, "Ferdie's life, with a never-say-die attitude, is the hallmark of a true patriot, a man who was young, intelligent, elegant, loyal, hard-working, passionate, extremely likeable, with a strong and selfless will to succeed."

I travelled nowhere without him. I granted no interview without him being there. He was always by my side during my campaigns and we sometimes shared a room," adding that Ferdie, as he affectionately called him, was "a treasurer of my moment".

"Ferdie, who became the driver of the national vehicle for modernity and progress, served not for fame but because he had committed himself to a much higher principle, for which he had such unflinching conviction, that fuelled not only his work machine but also that of the party and ultimately the nation," the President added.

Preaching the sermon, Rev Father R.O. Ankrah of the St Mark's Anglican Church at Kyebi used the occasion to call on Ghanaians to cultivate the habit of forgiveness and strive to live in peace with one another to foster unity and peace.

He added that the habit of holding on to past wrongs always brought about hatred, bitterness, divorce and disunity among the people, a situation which he said could tear the nation apart and undermine its socio-economic drive.