Chad's troop deployment and the anti-jihadist campaign in the Sahel 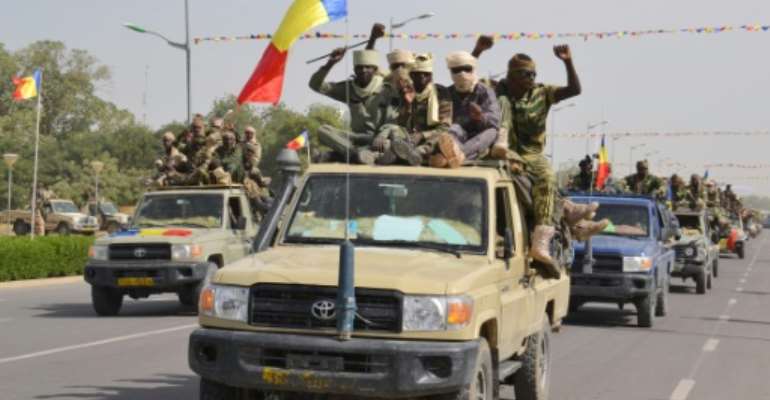 Chad's army is recognised as one of the region's most professional forces. By BRAHIM ADJI (AFP)

Chadian President Idriss Deby Itno has threatened to end the deployment of his troops beyond national borders, a move freighted with potential consequences for the campaign against Islamist insurgents in the Sahel.

His announcement came at the end of a reprisal offensive against Boko Haram jihadists from neighbouring Nigeria, who on March 23 killed 98 Chadian soldiers -- the worst single-day loss in the country's history.

"Our troops have died for Lake Chad and the Sahel. From today, no Chadian soldiers will take part in a military mission outside Chad," Deby said in remarks broadcast on Friday.

A thousand jihadists and 52 troops were killed in the operation, which Deby personally oversaw, according to the Chadian authorities.

Why is Lake Chad a hotspot?

Lake Chad is a vast body of water where the borders of Niger, Nigeria, Chad and Cameroon meet.

Its western shores have been hit by jihadists crossing from northeastern Nigeria, where Boko Haram launched a bloody campaign of violence in 2009.

The four countries bordering the lake on 2015 set up a formation called the Multinational Joint Task Force (MNJTF), also including Benin, to fight Boko Haram.

But Chad has shown frustration with the MNJTF, saying it is doing all the heavy lifting.

"Chad is alone in shouldering all the burden of the war against Boko Haram," Deby complained publicly, a few days before the end of the counter-offensive.

"What happened on the shores of Lake Chad (on March 23) was the straw that broke the camel's back," says Jean-Bernard Padare, former secretary general in the president's office and spokesman for the ruling party.

"We would have liked to have the help of countries concerned, notably Niger and Nigeria, but we unfortunately observed that they did not move."

Chad is relatively speaking a military power in the Sahel.

Its troops have high prestige in this impoverished region, playing a key part in Deby's web of developing regional and bilateral alliances.

They are stationed on the borders with Sudan to the east and the Central African Republic to the south, as well as far to the west beyond Niger in Mali, two nations hard-hit by jihadist activity.

In addition to the MNJTF, Chad also provides troops for MINUSMA, the UN mission in Mali.

It is also a member of the G5 Sahel -- a scheme backed by France aimed at easing the Sahel's dependence on French troops to fight the jihadists.

The G5 Sahel plans a 5,000-man force of troops from Burkina Faso, Mauritania, Mali and Niger as well as Chad, but has run into major problems of funding, training and equipment.

"The fact is that the Chadian army is one of the best in the region," said a Sahel diplomat working in Burkina Faso. "Deby knows this and uses it to pressure his partners."

How far Chad intends to realign its troops is unclear. In the past, threats to withdraw troops from sub-regional operations have not been carried out, although this time frustration at the perceived failures of allies seems strong.

The withdrawal of Chad's MINUSMA contingent has been swiftly ruled out, and the authorities have been blowing hot and cold about the G5 Sahel.

"While heads of state can't agree on the principle of solidarity, it will be very difficult henceforth to commit ourselves alone, in the G5 Sahel framework and in the sub-region in general," Chadian government spokesman Oumar Yaya Hissein told AFP on Saturday.

The main jihadist groups in the Sahel. By (AFP)

But the following day, the foreign ministry spokesman said: "There has never been any question of Chad disengaging" from the G5 Sahel force.

In contrast, the spokesman, contacted by AFP, was not specific about the future of a scheduled Chadian deployment of 480 men, promised by Deby in January.

The battalion-strength unit would be deployed under the G5 Sahel to the "three borders" region of Mali, Niger and Burkina Faso.

Already criticised for a lack of impact, the G5 Sahel force "has just taken another symbolic blow," an observer in Mali's capital Bamako said. "The joint force is a shell that gets emptier and emptier."