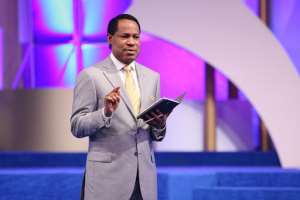 I have no more knowledge of technology than making calls and surfing the internet with my phone and laptop. The Mathematics I read at the University thought me no more than two almost outmoded programming languages.

But here we are having a universal conversation about a virus with a slippery ubiquity which has given birth to so many conspiracy theories and now a concern for the 5G technology. Some of the conspiracies have been nourished by anxiety over the alarming 113,000 plus deaths caused by this pandemic.

These conspiracy theories have received the attention of many as a result of the havoc that has accompanied this pandemic − an economic crisis with little modern precedent.

But Pastor Oyakhilome, popularly known and called Pastor Chris, is not the first to complain about the 5G technology. In fact, there is an advocacy group, STOP 5G UK’, which is agitating against the laying of 5G network fiber in the United Kingdom and has mass following on social media. No one in his fair mind would abruptly conclude that all members of this and other ‘agitprop’ groups against 5G have no understanding of 5G, radiations, or science. And the revered pastor, himself a technology enthusiast, has not said anything new that warrants unnecessary bashing, except from people whose prejudices overwhelm their objective faculties.

Rather, by introducing a new perspective to the whole conspiracy conversation, he has drawn linkages that may be eluding many in the world. For the many who think everything just happens are the very ones the pastor categorized as those who don’t read beyond what they studied in school.

Take for instance ID 2020, I have seen this code flown about on many platforms yet have never interrogated it. That is the focus of the point made by Pastor Chris. In every discourse, there is what is important and what is peripheral. The important linkages in the Pastor’s presentation is the linkage drawn between ID2020 vs 5G and COVID-19 Vaccine vs 5G which makes a mount of sense. At the periphery is the indirect link between 5G vs COVID-19 and COVID-19 vs ID2020. Fact is, the man of God did not take us into the realm of some religious gobbledygook neither did he mumble-jumble science by linking 5G to the genetics of the COVID 19 virus. However, he says the VACCINE is not the RIGHT VACCINE for our bodies. He also alluded to plots to re-engineer the population and cited notable groups including verifiable websites and articles.

I am not naïve to the effects of long exposure to mobile radiations such as 3G, 4G or 5G which is 10 times faster than 4G. In similar regard, vaccines and the concerns of side effects and maladministration dates back to years that I cannot recall.

Comments by the priest should cause us to look beyond just fighting this disease and begin conversations that may affect our people after the storm of this virus settles. Could it be true that the vaccine may contain magnetic substances that could easily connect with the 5G network? Who are the independent African scientists going to lead an investigation into the prospective vaccine in order to assure us that we are not going to take in more than we require against this virus? Or, shall we just treat this as another stray commentary from an errant religious leader? To me, the man spoke more science than religion and we may be doing ourselves and posterity a huge disservice by bastardizing everything the man of God said in relation to ID2020. Hitherto, we are so fixated on how to treat affected persons, or contain the virus so that our entire government apparatus is focused but on COVID 19. We may be taken by surprise by the new world we would meet after this crisis.

No avid reader would believe we live in a world made of facts and only verifiable evidence without conspiracies. The world we live in is built on geo-political and socio-economic arrangements of hypocrisy, propaganda and conspiracies. There is a huge body of documented evidence that Big Pharma used vulnerable populations to perform non-consensual tests. There are credible reports that detailed how Big Pharma sponsored scientists and university researchers ‘to cover’ side effects of some pesticides. Now that 15 of these pharmaceutical companies (of which at least 9 are largely influenced by Gates, a tech giant) have come together to manufacture a vaccine to fight COVID 19, and a conspiracy theory is raised against them, the world should be concerned.

So, while we focus on containment as well as drawing some political low-hanging fruits from the situation, let us adopt a multifaceted approach to dealing with any ‘invisible’ hand that may hurt our people after the pandemic. A new world order cometh. Je reviendrai!!!