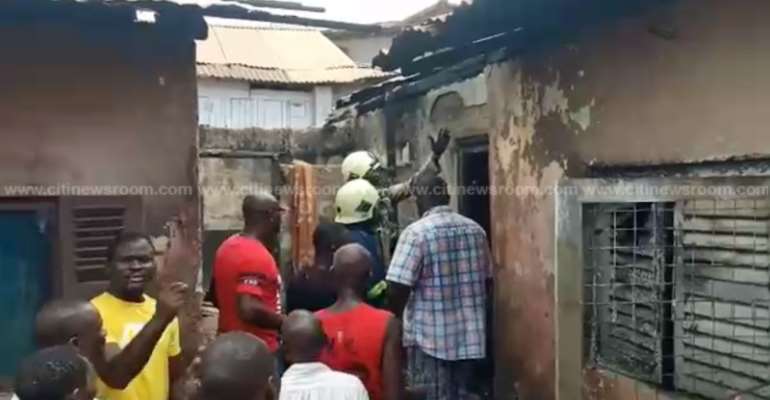 A fire outbreak on Good Friday has killed a mother and her two children at New Takoradi, a fishing community in the Western Region.

The mother was in her early 30s and her children were aged one and the other eight months.

The deceased had gone to the affected structure to bath with her two children.

The Western Regional Fire Commander, ACFO Gaddiel Ebonyi, narrating the incident said some premix fuel kept close to the bathroom was being poured into another gallon not far from a coal pot and this triggered the inferno.

“Gallons of petrol are here, and they were pouring the petrol to another container and there was also a coal pot of fire somebody was cooking behind it. In a situation like this, there is no way the two can exist without the fire not coming into contact with that fuel.”

“So it is the business they were transacting that brought the fire. It is simply not good for petrol to be kept in the house, the best way is to get the fuel from the filling station. According to them, they also do some mixing which could be done at the sea shore.”

“So hoarding petrol in the house is not advisable at all. Please we should all stop doing things like that so we can protect our families.”

ACFO Ebonyi also said the fire service had a difficult time accessing the houses on fire due to the encroachment on the access road and urged the residents of New Takoradi to desist from such encroachment.