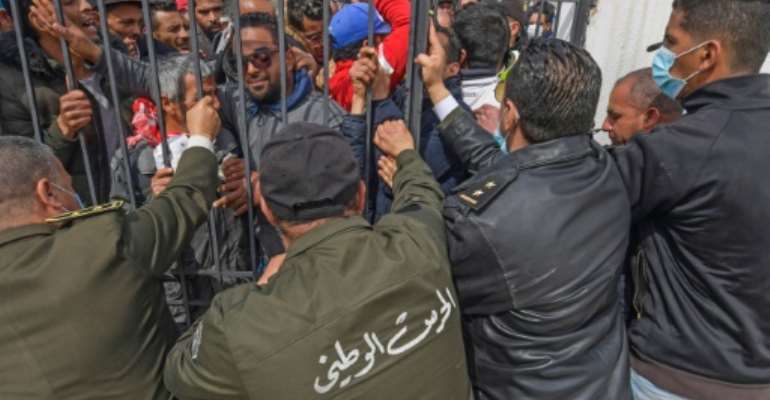 Tunisians angered by a coronavirus lockdown gather outside a government office on the outskirts of the capital. By FETHI BELAID (AFP)

Several hundred Tunisians demonstrated in a working class district of the capital Tuesday, demanding government support and protesting a week-old lockdown against the coronavirus pandemic that has disproportionately impacted the poor.

"Let me at least bring bread home for my children," the bricklayer told AFP.

In poor areas like Mnilha and Ettadhamen on the outskirts of the Tunisian capital, healthcare facilities are limited and the many people who work as day labourers are without income because of coronavirus containment measures.

"I haven't worked in 15 days," a woman named Sabiha said.

On Monday, angry residents marched to the local government office to demand welfare payments and permits to leave their homes. Some even blocked roads and burned tyres.

Prime Minister Elyes Fakhfakh announced on March 21 a 150 million dinar ($52 million 48 million euro) economic support package for those worst affected by the lockdown but did not say when it would be distributed.

Then on Monday the ministry of social affairs announced that payments would be distributed from March 21 until April 6, causing a rush to local government offices to register.

"We're trying to tackle the epidemic. But every day it's the same and they're gathering in front of the office," Mnilha councillor Imed Farhat told AFP.

"We're asking law enforcement to intervene. But what can we do? We have to listen to them."

He did not say how many were still detained.

Meanwhile the presidency announced on Tuesday it would release 1,420 prisoners in an amnesty to alleviate crowding in prisons.

Tunisia has officially reported 312 cases of COVID-19 since March 2, including 10 deaths.

The pandemic has halted tourism, a key sector for Tunisia, and numerous businesses and non-essential activities have been closed since March 4.

Originally scheduled to end on April 4, the lockdown is expected to be extended.