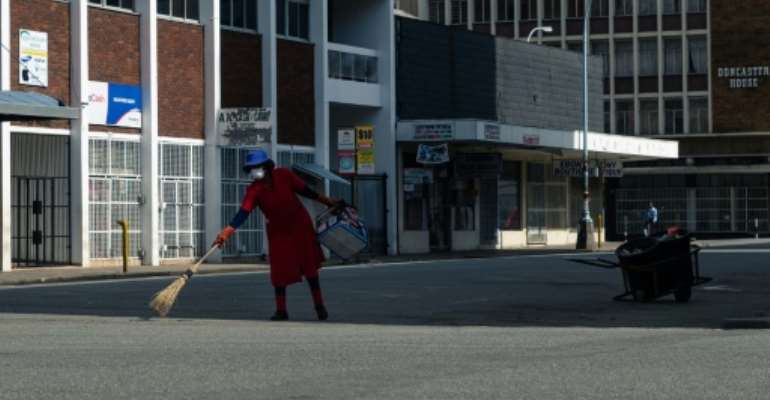 Deserted: A street cleaner in Harare on day one of Zimbabwe's three-week lockdown. By Jekesai NJIKIZANA (AFP)

Zimbabwe on Monday began enforcing a three-week lockdown in its fight against coronavirus after the disease left one person dead and infected six others.

President Emmerson Mnangagwa declared a 21-day "total" lockdown from Monday, curtailing movement, shutting most shops and suspending flights in and out of the impoverished southern African country.

Police mounted checkpoints on routes leading to Harare's central business district, stopping cars and turning away pedestrians who had no authorisation to be in the area.

Key workers exempted from the lockdown prepare to board a government-subsidised bus in Harare. By Jekesai NJIKIZANA (AFP)

Elsewhere truckloads of metropolitan and national police armed with batons were on patrol, ordering people back to their homes.

Her colleagues, in riot gear, dispersed people standing in small groups at the Copacabana minibus terminus, which is usually abuzz with people including foreign currency dealers.

In the township of Mbare, a usually bustling terminus for long-distance buses was deserted, with only municipal street cleaners sweeping the empty bus ranks.

A traditionally busy downtown area of Harare referred to as "The Third World" resembled a ghost town with few people on the streets. Most shops had their shutters down.

For many of the country's 16 million people, who are already suffering a grim economic recession, the lockdown means even tougher hardship.

With unemployment rate estimated at around 90 percent, most Zimbabweans have informal jobs to eke out a living and few have substantial savings.

"All these children you see here are my grandchildren," Mbare vegetable vendor Irene Ruwisi said, turning to point at four children standing close by.

"They need to be fed, but there is nothing to eat and we have been barred from vending. How do they expect us to survive?" said the grandmother who appeared to be aged in her 80s.

Standing idly outside her house, she was yet to be convinced that coronavirus is real, suspecting it to be a government ploy.

"Who brought that disease which they are lying about in order to get money to splurge while we suffer? What's the money they are getting being used for? Where is it going? They should give us the food they were given to feed us," she said.

Some in Harare were trying to leave the city for rural villages.

"We would rather spend the 21 days at our rural home, where we don't have to buy everything. I can't afford to feed my family here when I am not working," said Most Jawure.

"We have been waiting here for more than two hours but there are no buses," Jawure told AFP while standing with his wife and daughter beside a bulging suitcase.

In Zimbabwe's second largest city of Bulawayo, located in the southwest, police on horseback and others on bicycles were dispersing people at marketplaces.

A man hawks carrots to passers-by in the Harare suburb of Mbare. All formal food markets have been closed for three weeks. By Jekesai NJIKIZANA (AFP)

Shoppers at a TM-PicknPay, a leading supermarket chain, were subjected to temperature checks before entering and those with high readings were denied entry.

Kelvin Moyo, 28 an informal trader from Bulawayo's Entumbane township complained about the short notice given to prepare for the lockdown.

"We only had the weekend to set us aside food for 21 days," said Moyo. "Food is now expensive in Zimbabwe and money is hard to come by."

"We live from hand-to-mouth," he said.

"In reality, we are all doomed. I am just praying something will come up mid-way, or else me and my wife and kids, we will die of hunger."