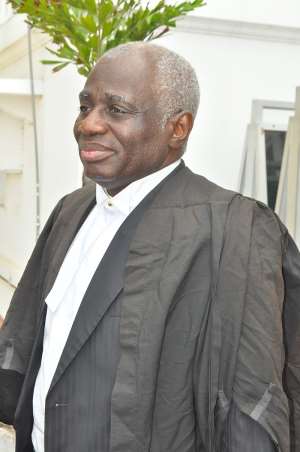 “Ignore the rumours and fake news. I am well”, were the words of Tsatsu Tsikata, when The Herald spoke with him on his home phone today, Saturday, March 28, 2020 over swelling rumours on social media that the highly respected legal luminary had passed on.

Ahead of the telephone call to Mr Tsikata’s Cantonments home in Accra, a senior lawyer, who has access to him and had done some cases with him, told The Herald’s Managing Editor, Larry Dogbey upon a WhatsApp chat Friday midnight; “If it’s about Tsatsu Tsikata, he is alive and well”.

The rumours started late Friday evening with many worried Ghanaians calling journalists or persons they suspect had some close ties with the ex-Ghana National Petroleum Corporation (GNPC) boss, to verify the claim that he had died.

No health condition was mentioned in the rumour which was all over Facebook and WhatsApp platforms, as having killed Mr Tsikata,

One of them read “Breaking News! We have lost lawyer Tsatsu Tsikata some few hours ago at Ridge Hospital, Accra”.

But sounding very hale and hearty, Mr Tsikata, asked this reporter during the brief conversation to “Ignore the rumours and fake news”, adding “I am well”.

It remains unclear who engineered the rumour of Mr Tsikata’s death, and what it was intended to achieve at a time the world is sitting on tenterhooks over the deadly Coronavirus, which has forced President Nana Akufo-Addo to lockdown parts of the country; Accra and Kumasi, beginning Monday, 30th March 2020.

Many believe it was politically engineered to divert attention from the government’s failures in the fight against the COVID-19, which official records mentions Ghana as having recorded 137 cases, 4 deaths and 2 recoveries.