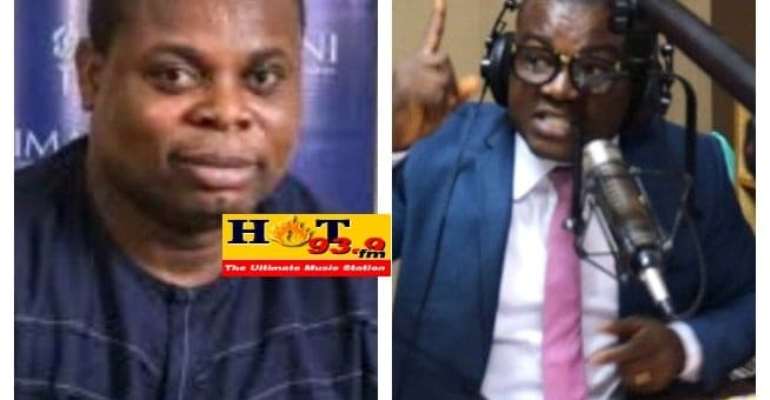 The host of 'Maakye',a socio-political show on Accra-based Hot 93.9FM, Isaac Boamah Darko has 'punched hefty blows' at policy think tank, IMANI Africa over their petition regarding the termination of port trade contract sent to the office of the President.

This according to the petition caused the Government of Ghana through the Ministry of Trade and Industry to reach a new agreement with Customs UNI-PASS International Agency (CUPIA) of Korea Customs Services in 2018.

IMANI Africa indicating their interactions with the industry players disclosed that UNI-PASS piloting system were 'poorly executed' and further accused the Ministry of Trade of engaging in an expensive contract with the new company.

Ironically, Boamah Darko, deliberating on IMANI AFRICA's Petition on his show, accentuated candidly that,the argument raised by the Policy think tank were 'questionable and lies' as a result, they ought to sought deeper understanding before issuing the petition.

Making reference to Paragraph nine of the petition that states, “The latter's potential impact on the trading community and revenue generation for the government have been unanimously bemoaned by many users of the ports who have witnessed poorly executed and unsuccessful piloting of UNIPASS at many of our critical ports and borders”, Boamah Darko, described the submission as falsehood and asked IMANI Africa to outline specific players they engaged in the ports industry and challenges encountered in their findings to concretize their concerns.

About paragraph 10, Boamah Darko argued that “however, what should be of utmost importance to you is the documentation over Ghana Link's contract for similar services promised in Sierra Leone the government of Sierra Leone entered into an agreement with Ghana Link and its subsidiary, Africa Link Inspection Company (ALIC), which among other things, the latter was expected to develop, implement and keep up-to-date Computerised Risk Management System

After six years in operation, Sierra Leone's Ministry of Finance undertook an audit and review of the operations of Africa Link Inspection Company”. Apart from significant findings of tax evasion, one other finding that give us cause for worry about the capability of Ghana Link to successfully implement in Ghana is the one Sierra Leone's Solicitor-General captures in his December 8 in 2019 legal opinion to Sierra Leone's Financial Secretary, for the termination of Ghana Link's contract as ALIC had not been complying with section 4.3 of the agreement in respect of training programmes dealing with local and overseas training courses in the areas of computerized Risk Management System, Transaction Price data and other areas of inspection”.

He, therefore, accused UNI-PASS of failing to meet their responsibilities and said that the contract was not a single window but a destination inspection (DI) which is entirely different trading modus operandi. About tax evasion, “There is no evidence that the company has paid corporation tax to government”.

A recent tax audit conducted by the National Revenue Authority (NRA) reveals that the company tax liability is about Le45 billion. It is important to note that Ghana's trade and finance Ministers and their deputies continue to make the case for Ghana Link to replace existing systems that are working perfectly fine on the basis of Ghana's Link superiority in implementing the two functions mentioned and promised in Sierra Leone, but which evidently has failed for six years. This could only mean one thing-that Ghana Link did not have the capacity to simultaneously implement the components they signed up to.

According to arguments raised on tax evasion, Mr. Boamah Darko stated that President of Sierra Leone at the time the contract was reached instituted a tax holiday for companies which had Ghana Link benefitting from the government– adding that, IMANI Africa had no basis for accusing Ghana Link of tax evasion.