By Philip Machanick - The Conversation 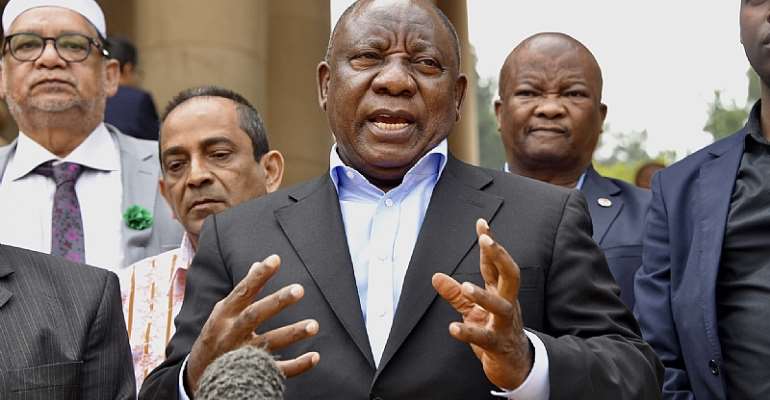 Exponential growth is a hard thing for the human mind to grasp. In nature, it seldom comes at us with the rapidity with which the COVID-19 pandemic is unfolding. This leads people and governments to make suboptimal decisions, like waiting until the disaster is self-evident before reacting.

Take compound interest, for example. Every time you look at an account that attracts interest, the interest is a little more. If you stop looking for a long time, it's a lot more. This is exponential growth: the new bit you add is the same fraction each time but it is a fraction of the new, bigger amount.

South Africa's President Cyril Ramaphosa has announced a 21-day lockdown , in a much more complete form than any developed country has contemplated. Some have reacted with dismay, arguing that this approach will cripple the economy . Others have turned to now-debunked ideas like “it's no worse than the flu”. Still others fear that a lockdown is an attack on rights ; but this is like arguing that the state has no right to ban dangerous driving. South Africa has one of the strongest rights-based constitutions in the world. No one is rushing to court to overturn the plan.

As a computer scientist who also works in bioinformatics, I'm very familiar with exponential growth. It is this background that makes it clear to me that Ramaphosa has done the right thing.

In 1965 engineer Gordon Moore predicted that computing power would continue to grow exponentially while the monetary cost of that power stayed consistent: more power, for the same or less money. Moore's Law has held true for decades.

In the early 1990s, I predicted that IBM would be in trouble when microprocessors overtook traditional mainframes in speed because they were on a faster improvement trajectory. Right on schedule, IBM set a new record for losses in 1993. Sequencing Cost per Genome August. National Human Genome Research Institute

Advances in gene sequencing are even more spectacular; from the initial human genome project, which cost nearly $3-billion over about 10 years, we can today sequence thousands of genomes for research purposes.

A log scale flattens out an exponential trend and makes it easier to see how it is progressing. In South Africa's case, since it is early days, numbers are mixed with discoveries of imported cases so the underlying trend is not so clear. Data are only available for 5–24 March (the last was the date of writing, so the number could go up).

The Mail & Guardian newspaper has published projections that show exponential growth which would put the country at over 4,000 cases by 1 April. Where South Africa is as March draws to a close, according to its report, is where Italy was three weeks ago. US COVID-19 Trend. Worldometer numbers; graph by myself

Let's look at how the number of COVID-19 cases has increased in the US to get an idea of why this is such a dangerous pandemic, since it is further along with the trend. The Worldometer site provides convenient graphics to see the issue. You can view their graphs on a linear or log scale. I redrew their graphs for the US for the period of 15 February to 22 March 2020.

Look at the scale on the log₁₀ graph. The top number on the vertical axis is 5. That represents 10⁵, or 100,000. The two dotted lines illustrate how a small change in the trend will take you to 100,000 a few days sooner or later. But from the current high point of the graph, 43,734, it is scarily close.

It is this scarily fast acceleration that takes human ability to process information by surprise.

The day too many patients arrive for a country's intensive care units is like the first ripple before a tsunami. The next day, the ripple is bigger. Then bigger still. It doesn't let up. When it becomes clear that it is a full-blown tsunami, the next wave is even bigger.

This is the tyranny of exponential growth: societies with the best health systems are getting hit worst because the cliff they fall off when it overwhelms them is that much higher.

For this reason, waiting until there is a crisis is very much the wrong strategy. The day your capacity to treat patients is overwhelmed, it will stay that way as long as you cannot almost totally stop the growth in number of cases.

Eventually numbers will drop as sufficient of the population develop immunity (herd immunity is estimated at 60% ). But until then, the medical system will remain overwhelmed, leading to many unnecessary deaths.

This is why the notion that you have a binary choice between the economy and the medically optimal strategy is wrong.

If a country cannot either stop the thing in its tracks or do what some describe as “ flattening the curve ”, it will in any case crash its economy.

Flattening the curve assumes a country can keep numbers below the level where medical services are overwhelmed. The risk with this strategy is overshooting – not quite flattening the curve enough. This is risky in the US or UK . In a country like South Africa with very poor public health, and high rates of HIV and tuberculosis , the risk gets even higher.

South Africa's extreme strategy of a 21-day lockdown is justifiable on medical grounds. What about the economy?

Some have argued against extreme lockdowns on the basis that it will trash the global economy. But countries that have not taken this approach are already paying an extreme price – not only in loss of life but economically.

When the world comes out of this, the country that has preserved its human capital the best will come out ahead. Its leaders will be able to look their people in the eye and honestly say “I did my best”.

Philip Machanick does not work for, consult, own shares in or receive funding from any company or organisation that would benefit from this article, and has disclosed no relevant affiliations beyond their academic appointment.