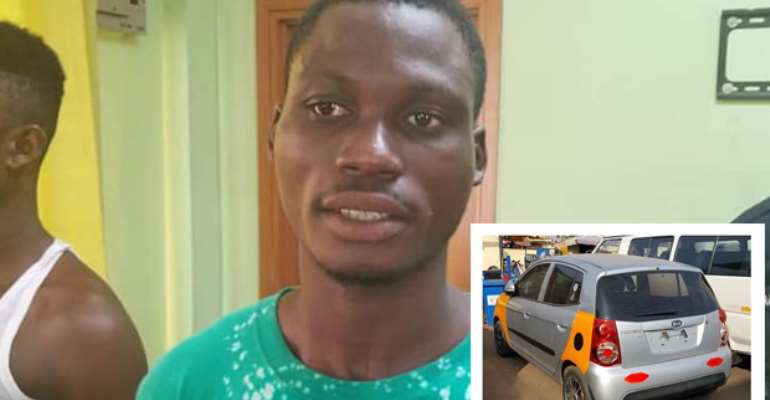 Emmanuel Tetteh. INSET: The taxi cab after it was retrieved.

A 20-year-old taxi driver at Ashaiman in the Greater Accra Region, who was hired by a car-snatching syndicate from Ashaiman to Dawhenya, has been gruesomely murdered.

The lifeless body of the taxi driver, Emmanuel Bioh, was found with bullet wounds in a bush at Aveyime in the North Tongu District of the Volta Region without the car.

Information available to DAILY GUIDE indicates that on March 17, Narkotey Solomon gave his KIA Morning taxi cab with registration number GT 5822 -20 to his younger brother, Bioh, as a spare driver.

Bioh was later hired by a group of young men at Ashaiman at about 8.30pm who wanted the taxi driver to take them to Dawhenya in the Ningo-Prampram municipality of the Greater Accra Region.

The spare driver accordingly informed his brother about the trip to Dawhenya but he went missing with the taxi after his services had been hired.

Solomon Narkotey, therefore, reported the matter to the Ashaiman police who also upon intelligence arrested one Emmanuel Tetteh, 23, at Aflao in the Volta Region with the stolen taxi cab when he was offering the missing car for sale.

Tetteh then led the police to Sege near Ada in the Greater Accra Region where he resides and the number plate of the car was retrieved.

He then claimed to the police during interrogation that he 'conspired'with the spare driver (Bioh) to steal the car but did not know where the driver was.

A team of detectives led by the Ashaiman District Crime Officer, Deputy Superintendent of Police (DSP) George Antwi Tanoh, on Sunday conducted further search at the residence of Tetteh and was able to retrieve a Samsung mobile phone and a driver's licence belonging to Bioh.

Further investigations led the detectives to the Aveyime Banana Plantation near a location known as “Cattle Ranch” in the North Tongu District where the spare driver was found lying dead with some bullets wounds on the neck and the left knee.

The Ashaiman police, in collaboration with their counterparts at Aveyime, then arrested one Donu Gbodzo, 45, and a single barrel gun was retrieved from his room at Agyemankope, near Sege.

One Emmanuel Vontey who is 18 years old was also arrested at Agdrafo, near Sege, in connection with the murder.

The police are now hunting for one other suspect, only known as Ackah, who managed to escape.

They have provisionally been charged with conspiracy, robbery and murder.

Shatta Wale to spend another night in police cell; to face c...
26 minutes ago