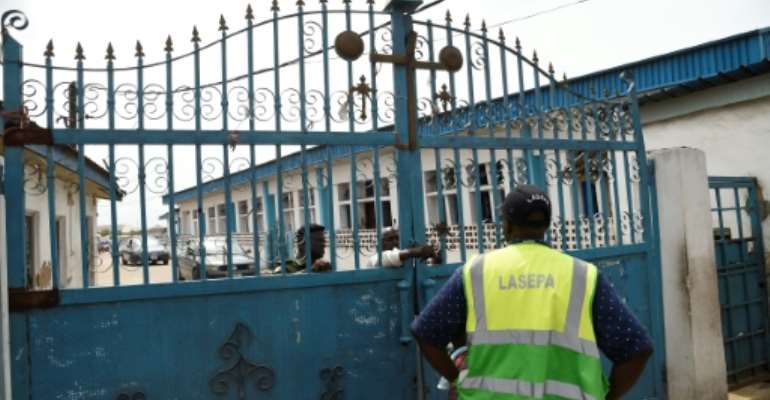 Worshippers clustered at the gate of Makoko's Celestial Church of Christ only to find policemen handing out fliers on the dangers of the virus. By PIUS UTOMI EKPEI (AFP)

Nigerian police with megaphones struggled to keep the faithful in bustling Lagos away from church on Sunday, as worshippers in Africa faced tough restrictions aimed at halting the spread of coronavirus.

"Go home, coronavirus is not a joke," a uniformed officer shouted at a crowd in the tightly-packed slum Makoko.

Authorities in the city of around 20 million have limited religious gatherings to no more than 50 people -- a miniscule number compared to the thousands who regularly pack out churches.

Tensions rose as worshippers clustered at the gate of Makoko's Celestial Church of Christ only to find policemen handing out fliers on the dangers of the virus blocking their way.

"No-one told us that the churches were closed," shouted Judith, a young woman dressed up in her best Sunday outfit of a sparkling dress.

"We want to pray, coronavirus is not here -- it is the whites who brought it to us."

Florence Uche, a regular at the Methodist Church of the Trinity on Lagos island, said she would not miss the Sunday service for "anything in the world".

But she still had her temperature taken at the entrance and insisted she was not hugging her fellow worshippers any more.

"God told me three days ago to spread the word that the spirit of coronavirus is dead. We will soon attend its funeral," she said, brandising a bottle of hand sanitiser.

Some 30 kilometres (18 miles) away in neighbouring Ogun state, thousands of believers flocked to one of Nigeria's largest pentecostal churches despite similar limitations from local authorities.

"Coronavirus cannot stop God's children, but I assure you that the solution will be found this week," Bishop David Oyedepo told those gathered at the Living Faith World Outreach Ministries.

The roughly 10,000 people praying and singing was still far short of the 50,000 that the church can hold as worshippers were told to gather in homes and local church branches to follow the service on television.

"Our markets are open so there is no way to curb this but only God can save Africa from this pandemic," the bishop said.

From Kenya, to South Africa, to Nigeria, authorities across the continent have imposed draconian limits on their deeply religious populations to curb the rising number of confirmed infections.

Nigeria, Africa's most populous nation of some 190 million people, currently has 27 recorded cases, but testing has been limited.

Most places of worship were closed in Kinshasa, the chaotic capital of the Democratic Republic of Congo, for the first time in living memory.

"Since we were born we can't remember anything like this," Catholic priest Father Michel from the shuttered Notre Dame de Fatima told AFP.

"But it is for our own good, for our health."

Services were broadcast over the internet and radio, and donations were made online after religious leaders told citizens to take the new virus as seriously as the Ebola epidemic that has ravaged the country.

"It is quite shocking as Sunday is the day dedicated to Jesus," said 16-year-old high school student Deborah.

"But we understand that it is for our own security."

Elsewhere in the region, pastors have come up with new ways to reach out to their congregations.

In Abidjan in Ivory Coast evangelical preachers made tours of private houses where worshippers had been told to gather in groups of 20 or 30.

Soap and sanitiser was waiting for visitors outside one home in the crowded district of Yopougon as some 20 people inside sat on plastic chairs one metre apart from each other.

"Usually the congregations are about 3,000 or 4,000 people," said evangelist Elie Kone from the Baptist church.

"But this is not too serious -- our faith is above all inside us."

Despite a government ban of gatherings of more than 100 people in Zimbabwe, worshippers flocked to Harare churches on Sunday.

The Zimbabwe government stepped up its rhetoric to try and dissuade people, even going so far as to say that worshippers risked going to hell.

"Let's be responsible. All of us will die. And then go to hell," government spokesman Nick Mangwana said on Twitter.