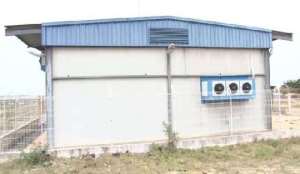 The one-million Euros cold storage facility built to address post-harvest fish losses in the Ningo-Prampram District of the Greater Accra Region is to reopen in about a week, upon the directive of the Government.

The Spanish FAD-sponsored refrigeration facility comprising cold storerooms, a freezing tunnel, an ice bin, and a flake ice factory, was closed about four years ago as a result of unpaid electricity bills.

Engineers have started rehabilitation works by replacing parts that have broken down and it is expected to be fully operational in the next seven days.

Mr John Peter Amewu, the Minister of Energy, speaking to the media during when he toured the facility, said issues about the fisherfolks were of great concern to President Nana Akufo Dankwa Addo; hence his directive to reopen the facility for operations.

He said the Ministry would work with all stakeholders to find a way to settle the debt to enable the facility to operate to achieve its objective of reducing poverty caused by post-harvest losses.

The visit enabled the Minister learn more about the facility and interact with its interim Management.

Mr Amewu advised the Management of the facility to initiate steps such as shutting down the facility when it was without fish to reduce the electricity cost.

Answering a question on adding renewable energy sources to reduce the bill, the Minister said, it would be considered in due course because the initial high cost of installation must be dealt with.

Nii Joseph Armah Quaye, the Interim Director of the Facility, thanked President Nana Addo for granting their request to re-open the facility.

He stated that the Landing Beach Cold Store was the first of six to be located in different fishing communities at a total cost of $7 million during the tenure of former President John Agyekum Kufuor.

He said the cold store produced ice cubes in large quantities for fishermen who used them to preserve their fishes whilst at sea.

However, it was disconnected by the Electricity Company of Ghana for unpaid bills.