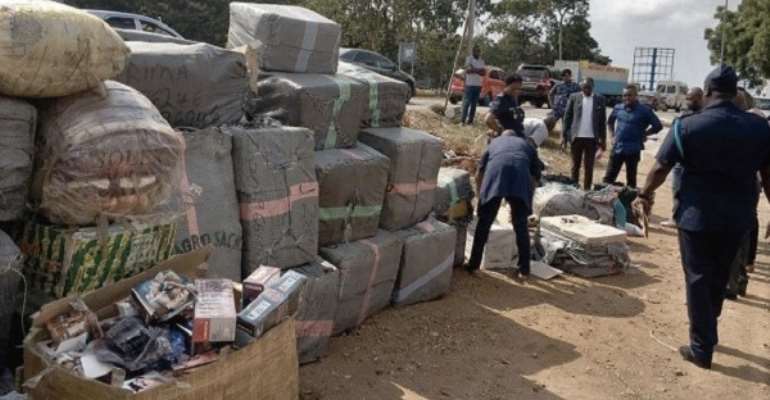 A Cargo truck, carrying two 40-footer containers loaded with goods suspected to be unwholesome pharmaceutical products and wax prints imported into the country, has been intercepted at Achimota in Accra.

The driver of the truck, Sani Mohammed, 30, has been detained by the police while the truck, with registration number, AE 960 JEG, believed to have come into Ghana from Nigeria, has been impounded and is being kept at the Customs yard near the Kotoka International Airport.

Examination
A team from the three organisations involved in the operations yesterday examined the goods on the truck at the CEPS yard, as part of investigations to get the person or persons behind the importation of the goods arrested.

Speaking to the Daily Graphic after the examination of the goods, the Head of Communications at the Food and Drugs Authority (FDA), Mr James Lartey, confirmed that the pharmaceutical products were unwholesome and thus not fit for the Ghanaian market.

In order to safeguard public health, he said, the unwholesome pharmaceutical products would be disposed of safely.

He, however, did not indicate what would be done with the wax prints

Mr Lartey stated that under the Public Health Act, anyone who imported counterfeit products would face a minimum jail term of 15 or a maximum 25 years’ imprisonment and a fine ranging between GH¢75,000 and GH¢180,000, indicating that the importers had flouted the law and would thus be dealt with accordingly once apprehended.

Origin of goods
The Public Relations Officer of the Accra Regional Police Command, Deputy Superintendent of Police (DSP) Mrs Effia Tenge, said the driver was assisting with investigations to establish the identity of the owners of the goods and how the truck came into the country.

So far, she said it had been established that the cargo truck came from Kano State in Nigeria and the goods were to be distributed in some areas in Accra and its environs.

The Chief Revenue Officer in charge of Communications and Public Affairs at the Customs Division of the GRA, Mr Johnson Menlah Yankey, said it was suspected that the truck used an illegal point of entry since the Nigerian borders had been closed for some time now.

He suspected an illegal route was used to bring the goods into Ghana because there were examination officers at all the borders of Ghana who would have examined and inspected the goods had it gone through any of the legal points of entry.

Mr Yankey also believed that the driver might have used a temporary vehicle importation (TVI) document to outwit officers at any checkpoint where he was stopped and questioned.