By Dmitry Zaks with AFP bureaux 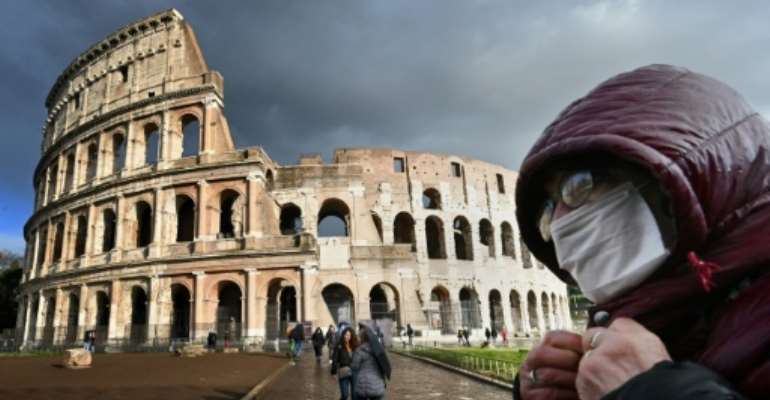 In Europe's hardest-hit country, Italy, officials are trying to close off a vast area including the cities of Milan and Venice. By Alberto PIZZOLI (AFP)

Global financial markets tanked, oil prices crashed and Italy extended strict quarantine meadures across the whole country on Monday as the deadly coronavirus disrupted economies and societies across the world.

WHO chief Tedros Adhanom Ghebreyesus warned "the threat of a pandemic has become very real," but stressed that "it would be the first pandemic in history that can be controlled".

The death toll from the novel coronavirus neared 4,000, with more than 110,000 cases recorded in over 100 countries since the epidemic erupted in December in Wuhan, China. It has disrupted global travel, and cancelled conferences and sporting events.

"The whole of Italy will become a protected zone," he said, extending measures that had already been put in place in the country's most affected northern regions -- mimicking a lockdown at the disease's epicentre in China -- across the whole country.

Tens of millions of people are now in quarantine worldwide but there are fears that the disease will spread further and force several economies into recession.

The number of cases in Europe passed 15,000 on Monday as Germany and Canada reported their first coronavirus deaths, but the vast majority of fatalities have been in China, where there are signs the outbreak has peaked.

Ireland meanwhile announced that it was cancelling the annual St. Patrick's Day Parade in Dublin.

It was also revealed that two US lawmakers with recent close contacts with President Donald Trump are in self-quarantine after being exposed to the virus.

Republican Representative Doug Collins, who shook hands with Trump on Friday, and Matt Gaetz, who travelled with the president on Air Force One on Monday, said they came in close contact with an infected person at a conference 11 days ago. Neither have reported any symptoms, and both are awaiting test results.

Coronavirus fears and the steepest fall in oil princes since the 1991 Gulf War sent markets into a tailspin, wiping hundreds of billions of dollars from exchanges and prompting analysts to dub it "Black Monday".

Major US indices plunged more than seven percent -- with the Dow Jones finishing more than 2,000 points lower in its worst session since 2008 -- following a 15-minute halt to trading early in the session triggered by a plunge.

European stock markets slumped dramatically, following a downturn in Asia, with indexes in London, Paris and Frankfurt falling by seven percent or more. 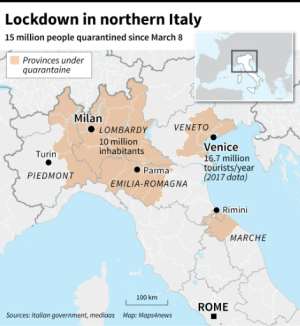 REgions of northern Italy under quarantine in bid to stem coronavirus spread. By Robin BJALON (AFP)

Millions of people have seen daily life disrupted by school closures -- with those announced Monday in Greece and Spain -- as well as runs on basic household goods and travel restrictions.

Italy reported 97 more deaths on Monday, bringing its toll to 463 and pushing Europe's total past 500.

Italian officials faced a further headache after prisoners fearful of infection protested or rioted in 23 jails across the country -- leaving several dead. 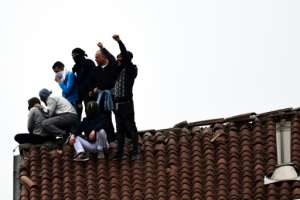 Italian officials faced a further headache after prisoners fearful of infection protested or rioted in 23 jails across the country -- leaving several dead. By Miguel MEDINA (AFP)

Conte said "it is our darkest hour but we will make it."

Sporting events continue to be severely disrupted, with the Indian Wells tournament in California cancelled.

Top-flight football matches across Europe were being played behind closed doors, and international rugby matches have also had several postponements.

There are mounting concerns that the United States -- the world's largest and most connected economy -- could be the next COVID-19 hotspot. 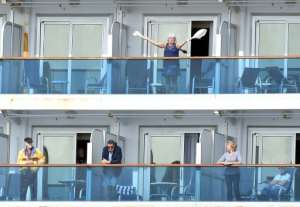 Donald Trump says passengers on the Grand Princess, which has 21 confirmed infections, should be made to stay on board. By Josh Edelson (AFP)

At least 22 people have died in the country and the number of cases has passed 500 as Trump's administration struggled to deal with a virus-hit cruise ship stuck off the California coast.

The Grand Princess docked in Oakland on Monday with 21 confirmed infections among its 3,500 passengers.

The president has been accused of peddling misinformation on the outbreak, but he hit back on Sunday, accusing the media of trying to make his government "look bad", tweeting that the White House had a "perfectly coordinated and fine tuned plan".

Some forecasters are painting a doom-laden picture for the global economy, and several central banks have already intervened to prop up faltering economies. 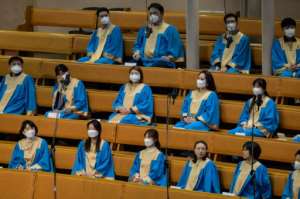 The International Monetary Fund called on governments worldwide to join forces and roll out aggressive financial supports, including direct payments to workers and businesses.

European Union leaders will hold an emergency videoconference on Tuesday aimed at coordinating their response to the outbreak.

But there were signs that the peak may have been reached in both China and South Korea.

China said it had closed most of the makeshift hospitals opened to receive coronavirus patients in the epidemic's epicentre around Wuhan, as the number of new infections in the country hit a record low.

There were 40 new cases nationwide, the lowest number of fresh cases since it started reporting the data in January. China has seen almost 75 percent of the global coronavirus cases.

The WHO reported that 70 percent of the people infected with the virus in China had recovered.

South Korea, which has one of the largest coronavirus totals outside China, reported its smallest daily rise in cases for two weeks.

But Iran announced 43 new deaths on Monday, bringing its toll to 237, and supreme leader Ayatollah Ali Khamenei cancelled an annual speech marking the start of the Persian new year.

Israel announced a two-week quarantine for all travellers entering the country.