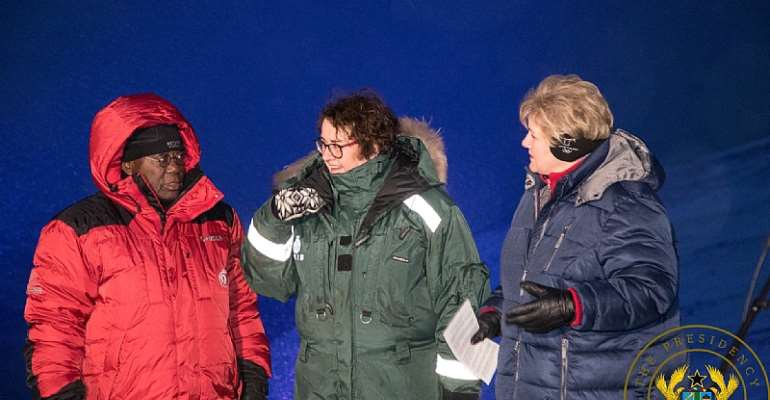 Following bilateral talks with the Norwegian Prime Minister as part of his trip to the Scandinavian country, President Akufo-Addo took some time to cool off, and he did, quite literally.

Having accepted an invitation from Prime Minister, Erna Solberg, President Akufo-Addo and some members of his entourage visited Svalbard, the island which lies between Norway and the North Pole.

There, President Akufo-Addo, according to his official Facebook page, witnessed about 60,000 new seed samples being deposited into the Svalbard Seed Vault to guard against the loss of seeds due to climate change.

With temperatures in Svalbard known to drop to as low as -16°C in February, it was not surprising to see the President, covered up snuggly in his winter coat.

The pictures of the President arriving at Svalbard, witnessing the seeds being deposited and interacting with the staff at the facility, were posted on the President’s Facebook page.

The snaps have since gone viral and have been shared widely across social media platforms.

President Akufo-Addo is currently the co-chair of the United Nations (UN) Eminent Group of Sustainable Development Goals (SDG) Advocates and a strong Climate Change advocate as well, so such an outing isn’t out of character for him.

“The Svalbard seed vault is an attempt to ensure against the loss of seeds in other gene-banks during large-scale regional or global crises. Tuesday’s deposit is the first big deposit to the Arctic facility since its upgrade, to future-proof it against climate change, taking the total number of seeds in the vault to more than a million,” read the caption that accompanied the photos.