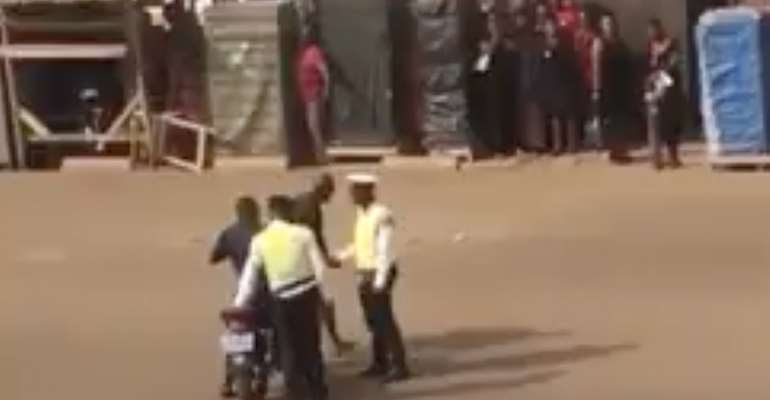 A security analyst, Adam Bonaa, wants the Inspector-General of Police (IGP) and the Interior Minister to order the immediate arrest of all the police officers who were seen assaulting some citizens in Sunyani over the funeral rites of a queen mother.

He described the actions of the police, some of who were captured in a video which went viral, as a major indictment to their image.

“For me, the action of the royal guards is very primitive. If you watch the subsequent videos, where some of the regional commanders officers turned on one of their own and started beating him and royal guards joined in with impunity.

“I will call directly on the Minister of Interior to act with speed and get all those officers arrested and detained and investigate them, interdict them,” Mr. Bonaa said.

In the said videos, the men, locally referred to as abrafuors as well as uniformed Motor Transport and Traffic Department (MTTD) officers, were seen beating and residents in the streets.

This follows a reported directive by the traditional authorities in the Bono Regional capital demanding that residents wear red or black attire to mark the mourning of their queen mother, Nana Yaa Nyamaa Poduo II, who died on August 1, 2019.

The Sunyani Traditional Council has however denied ordering its men to beat residents who were not in the right funeral attire.

A representative of the Sunyanihene, Kofi Adom Manu, admitted on Eyewitness News that “certain things went wrong but not [to the extent] of what you have been seeing.”

The Regional Police Command has already ordered an immediate inquiry into the incident.

The Bono Regional Police Crime Officer, Chief Superintendent Nana Kwaku Dua, also said a consensus has been reached with the traditional authorities to ensure their men are kept in check.