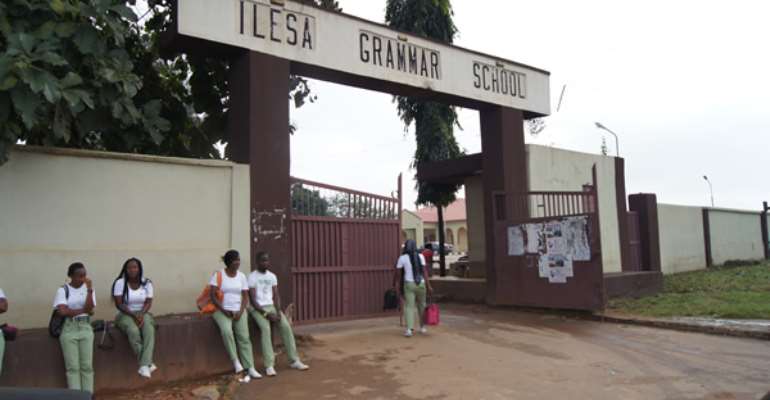 They are the AIONIAN Schools.
When sometime in 1929, the Reverend Canon Moses Craig Akinpelumi Adeyemi (1882 - 1942), then the Principal of Ondo Boys High School, Ondo, had suggested to three of his fellow School Principals to start a Brotherhood annual games during a meeting at St. Andrew's College, Oyo, little did he know that he was making history. If he knew he was making history, then his legacy is actively living on 78 years after his departure from this mother Earth.

Obviously, his persuasive skills were as efficacious as they were effective. He was able to convince his three other colleagues and the Brotherhood of AIONIAN Schools were formed the following year in 1930. The following four schools were the foundation members and their Principals:

(b) Ìjèbú Òde Grammar School, Ìjèbú Òde, founded in January, 1913. The Principal at this time was Rev. I. O. Ransome - Kuti.

(c) Ibadan Grammar School, Ibadan, founded in March, 1913. The Principal at this time, who was also the founder of the school was Rev. A. B. Akinyele.

(d) Ondo Boys High School, Ondo, founded in January, 1919 The Principal at this time, who also was theanchor for the founding of the school was Rev. Canon M. C. Adeyemi.

The above four Schools were the foundation members in 1930 and the name of the Brotherhood, "AIONIAN" was extracted from the initials of the schools, "AIONI" with the last "AN" added "to make it adjectival," according to an edited version of the history of the Brotherhood, by Michael Taiwo of Ìjèbú Òde Grammar School in 2013.

No other school was admitted into the Brotherhood until 1951 when Egbado College, Ilaro, joined. Manuwa Memorial Grammar School, Iju - Odo, was the next in 1954 with Gbòngán/Ode -Òmu Grammar School, Gbòngán,being the last to be admitted in 1955. Since then, the number has not exceeded 12.

Ibadan Grammar School, Ibadan, is the permanent Secretariat of the Brotherhood, why the incumbent Principal of the school is the Secretary on the permanent basis. Each school is referred to as a "House." For example, Ilésà Grammar School is referred to as "Ilésà House." The name of the Brotherhood has not been tampered with as a result of new admissions into the Club. It has remained the same over the years, bearing the insignia of the foundation members.

The political, economic and social capital of Ìjèsà land, Ilésà, would be agog starting from Thursday February 27, 2020 when the guests from all the twelve Brotherhood schools would be arriving for their sports and academic contests. The three day event comes to a close on March 1, 2020, when participants would head home. Ilésà Grammar School, the pride of Ìjèsà, is the proud host of this year's competitions.

AIONIAN Games has become a tradition that has been sustained through thick and thin. It has risen up to the challenges of the times. It has refused to succumb to the predatory financial exiguity that has killed many other laudable concepts. It has become an event to which many have been very proud to associate. It is an event that is even celebrated by non-participating schools.

If Canon M. C. A. Adeyemi, the man who conceived this wonderful idea, and after whom the Adeyemi College of Education, Ondo, was named, is smiling in his grave today, it would be deserved smiling. His vision has endured. His mission has continued to be accomplished with every event of the Brotherhood. His dream is alive. His legacy lives.

Welcome one and all to this year's AIONIAN Games. Welcome to Ilésà Grammar School, Ilésà. Welcome to Ìjèsà land.