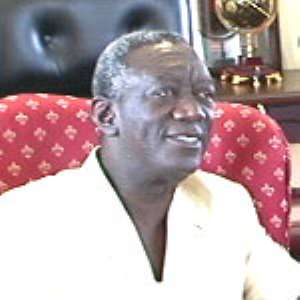 Others are Mr Jake Obetsebi-Lamptey, Minister of Tourism and Diasporean Relations, formerly Tourism and Modernization of the Capital City, Mr Alan Kyeremanteng, responsible for an expanded Ministry of Trade, Industry, Private Sector and President's Special Initiatives, and Dr Richard Anane, Minister of Transportation.

Mr Joe Ghartey, a former deputy minister, has been elevated to the substantive position of Attorney General and Minister of Justice, so has Mr Stephen Asamoah-Boateng, former deputy Minister of Tourism and Modernization of the Capital City, been elevated. He is now in charge of an expanded Ministry of Local Government, Rural Development and Environment.

Mr Joseph Kofi Adda, formerly Minister of Manpower, Youth and Employment, has been reassigned to the Ministry of Energy. Succeeding him at his previous post will be Northern Regional Minister Boniface Saddique. Interior Minister Papa Owusu Ankomah is now Minister responsible for a realigned Ministry of Education, Science and Sports, while Mr Kwamena Bartels, formerly of Private Sector Development and President's Special Initiative, has been reassigned to the modified Ministry of Information and National Orientation.

The statement said the list of Regional Ministers and Deputy Ministers would be released later. 28 April 06