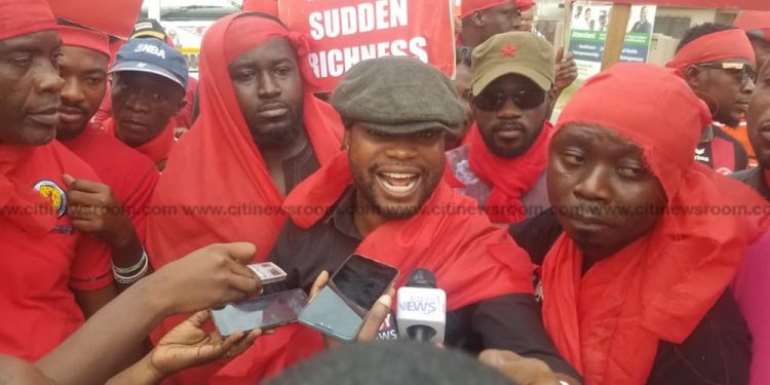 Customers of Menzgold are demanding their inclusion in the list of customers of collapsed financial institutions earmarked to be settled by the government.

They made this demand during a press conference where they presented 10 arguments urging the government to facilitate the retrieval of their locked up cash.

President Nana Akufo-Addo has assured depositors whose funds are locked up in collapsed financial institutions that they will have their monies paid back to them .

But the status of Menzgold customers still remains unclear.

At the event, a spokesperson of the coalition of aggrieved Menzgold customers, Fredrick Forson, called on the president to address their concerns during the upcoming State of the Nation Address.

“There is an urgent need for the state intervention to help Menzgold customer to retrieve our investments. We call on the Vice President, Dr. Mahammudu Bawumia to revise the category of people who are receiving money as [being under] collapsed banks and microfinance [firms] to include Menzgold customers since we are equally taxpayers and responsible citizens of this country,” he added.

According to the SEC, Menzgold had been dealing in the purchase and deposit of gold collectables from the public and issuing contracts with guaranteed returns with clients, without a valid license from the Commission.

The company was however cleared to continue its “other businesses of purchasing gold from small-scale miners and export of gold.”

It has however failed to fully pay its numerous aggrieved customers the value on their gold deposits as well as their entire investments.

Despite several protests to get their monies back, all their efforts have over the years have been futile.