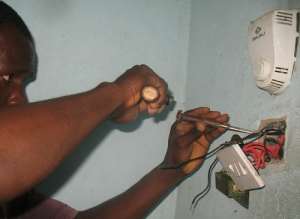 The Tamale chapter of the Certified Electrical Wiring Professionals Association of Ghana (CEWPAG) held its inaugural ceremony to outdoor the association and its elected executives on Saturday 15th February, 2020 at the Tamale Regional Library conference hall.

The event was well attended by CEWPAG members both in Tamale & other chapters, Electrical contractors, officials from the Tamale Metro Assembly (TaMA), the Ghana Standards Authority, Energy Commission certified wiring Inspectors in Tamale, official from Tropical Cables and conductor limited, Electrical cable and accessories dealers, CEWPs and some distinguished personalities in Tamale and the electrical industry.

The association was officially outdoored by the guest of honour of the occasion, who doubled as the regional boss of the Energy Commission Secretariat in Tamale, Mr. John Bukari.

In his remarks, he said from now onwards, Energy Commission dully recognise the Tamale chapter indicating that the commission would liaise with the association in its activities and the commission's efforts to realise the full and proper implementation of electrical wiring regulations 2012 (L. I 2008).

The Ashanti regional chairman of CEWPAG, Mr. Yaw Amponsah Ababio, who represented the national president of CEWPAG administered the Oath of Office to the newly elected chapter executives.

He calls on them to ensure unity in their ranks and also project the good name of the association through its social engagements with the general public.

Mr. Ababio added that CEWPAG members stand to gain a lot of opportunities because of the numerous engagements the association is partnering with other organizations to enhance the capacity of its members.

The elected chairman of the Tamale chapter of CEWPAG, Alhaji Fuseini Ibn Shiraz who spoke on behalf of the newly sworn-in executives, assure members and the general public that the association would engage with its stakeholders towards ensuring good electrical wiring is enforced in the metropolis, to help in saving lives and property.

The Northern Regional Coordinator of CEWPAG, Mr. Mohammed Aminu on his part, recounted some of the successes CEWPAG has chalked in the country.

He noted that the association would collaborate with all its partners to help in weeding out unqualified and unlicensed electricians in the system.

The chairman of the occasion, Hon. Alhaji Abu Takoro in his closing remarks entreated CEWPAG members to go about their work with professionalism, honesty and truthfulness.

He also admonished the general public to always engage the services of CEWPs in their electrical wiring works and also adhere to the professional advice given to them by the certified electricians.