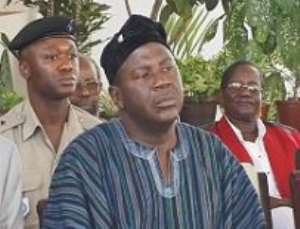 His visit comes in the wake of criticisms from sections of the public about his inability to attend the burial of the late King of Dagbon, Ya Na Yakubu Andani II even though he hails from Dagbon.

Meanwhile, Joy News Northern regional correspondent has been speaking to the new Regent of Dagbon, Naa Abdulai Yakubu Andani who says his immediate priority is to unite the Abudu and Andani factions to pave way for peace in Dagbon.

Naa Abdulai, who is acting Ya Na, said he would work closely with the family of the late Naa Mahamadu Abdulai to ensure that his funeral is performed in accordance with the tradition and customs of Dagbon.

The acting Ya Na who was flanked by his subjects and royal guards said the success of the burial of his father and his installation as regent is a success not only for the Andanis but for the Abudu's and the entire nation as well.