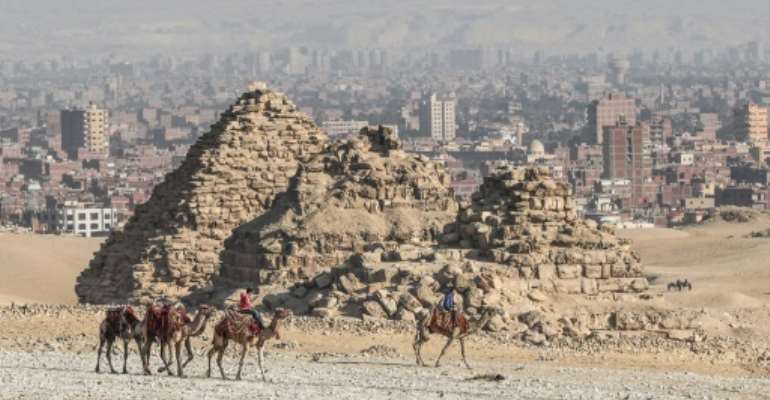 The North African country retains its position as the most populous Arab nation and Africa's third most populous country behind Ethiopia and Nigeria. By Mohamed el-Shahed (AFP/File)

Egypt's population has reached 100 million, the statistics agency said Tuesday, highlighting the threat of overpopulation in a poverty-stricken country where many live in crowded megacities.

The North African country retains its position as the most populous Arab nation and Africa's third most populous country behind Ethiopia and Nigeria.

A counter installed atop the Central Agency for Public Mobilisation and Statistics (CAPMAS) ticked over into nine digits for the first time, the agency said.

A new baby is born in Egypt roughly every 17.9 seconds, the statistics body calculated.

Most Egyptians live on the eight percent of national territory that is the stretch of arable land along the River Nile basement.

The lifeline, which Egypt shares with Sudan and Ethiopia, critically provides around 97 percent of Egypt's water needs.

A screen displaying the population count at the Egyptian Ministry of Planning headquarters in the capital Cairo. By Mohamed el-Shahed (AFP)

Birth rates in Egypt have skyrocketed in the past three decades with around 1.5 million babies born every year -- but they have recently slowed down as Egypt's government has encouraged smaller families.

Egyptians numbered around 57 million 30 years ago.

The latest census in 2017 showed nearly 95 million citizens residing in the country.

President Abdel-Fattah al-Sisi said at the time that terrorism and overpopulation represented the two most important threats for Egypt.

As with the majority of Arab countries, Egypt has a youthful population with just over 60 percent under the age of 30.

Around 10 million Egyptians live overseas, most of them in the Gulf in search of better economic opportunities. Their remittances have become an important source of income for Egypt.

Nearly one in three Egyptians live below the poverty line, according to CAPMAS figures released last year.

The unemployment rate is hovering 10 percent, with millions leading precarious lives often without social protection in the informal economy.