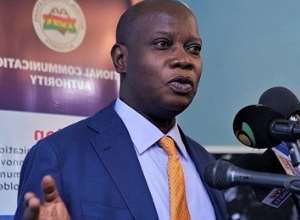 Mr William Mattew Tetteh-Tevie, the immediate past Director General of the National Communications Authority (NCA), has asserted that the Pegasus System procured for cyber security was installed, tested and handed over to the National Security Council Secretariat.

He said this yesterday when the prosecutor handling the case suggested to him under cross-examination that the equipment, which he gave approval for its purchase, was never used by the state.

Mr Tevie, Baffoe Bonnie and Nana Owusu Ensaw, all former board members of the NCA, Alhaji Osman, a former National Security Coordinator, and George Derek Oppong, a private businessman, had been charged for allegedly causing financial loss of $4 million to the state.

They had all denied charges of stealing, conspiracy to commit crime,wilfully causing financial loss to the state and money laundering and are currently on $1 million bail.

Mrs Yvonne Atakora Obuobisa, the Director of Public Prosecution (DPP), had accused Mr Tetteh-Tevie of personally benefitting from an amount of $150,000 out of the $4 million paid from the account of NCA to Infraloks Development Limited, a local agent that facilitated the purchase of the listening device from an Israeli company.

Mr Tetteh-Tevie told the court presided by Justice Eric Kyei Baffour, a Court of Appeal judge sitting with additional responsibility as a High Court judge that he had been an Information Technology (IT) consultant for more than 30 years with international repute, and that he would never steal state funds.

The accused stated that the investigator, who testified, did not find evidence of deposit of $150,000 in his (Tevie’s) accounts, after checks at the Financial Intelligence Centre(FIC), neither has any of the accused confirmed giving him such amount of money.

Mr Tetteh-Tevie said claims by the Director of Public Prosecution that he abused public office for personal gain, that he intentionally misapplied public funds by authorising the payment of $4 million as Director General of NCA were untrue.

The facts according to the prosecution are that the previous administration contracted an Israeli company, NSO Group Technology Limited, to supply a listening equipment at a cost of $6 million to enable the authorities to monitor conversations of persons suspected to be engaged in cybercrime and terror activities.

The facts said National Security did not have the money to fund the transaction and for that reason the NCA, which had supervisory jurisdiction over the use of such equipment, was asked to fund the project.

According to the prosecution, the remaining $3 million was lodged in the account of Oppong, who acted as a representative of the local agents, Infraloks Development Ltd.

The prosecution alleged that Osman fronted for the entire deal.

The accused persons were alleged to have later laundered the amount for their private benefit.