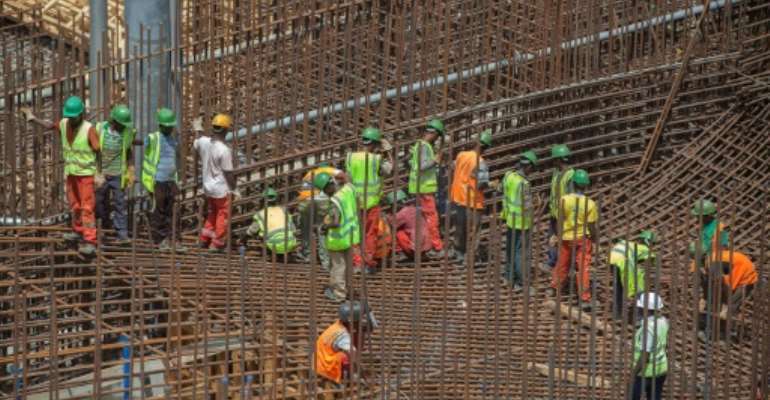 Ethiopian workers stand on scaffolding in 2015 during the construction of the Grand Renaissance Dam. By ZACHARIAS ABUBEKER (AFP/File)

Ethiopia, Egypt and Sudan on Friday pushed back their deadline to resolve a bitter row on a dam on the Nile until the end of February, but President Donald Trump voiced confidence that a deal was near.

It was the latest delay in the US-brokered talks on the giant Grand Ethiopian Renaissance Dam, which is slated to begin operations later this year and has sparked fears of conflict over scarce water resources.

But the talks have appeared to make progress. The latest session, held over four days in Washington among foreign and water resources ministers, focused on mitigation measures during droughts and other dry years.

"The ministers have instructed their technical and legal teams to prepare the final agreement," a joint statement said, "for a signing of the three countries by the end of February 2020."

The three countries "reaffirmed the importance of transboundary cooperation in the development of the Blue Nile to improve the lives of the people of Egypt, Ethiopia and Sudan."

Ethiopia says the dam -- which will be the largest in Africa -- is crucial for its growing economy, but Egypt fears the project will disrupt the river that provides 90 percent of its drinking water.

The US Treasury Department has been leading the talks after Egyptian President Abdel Fattah al-Sisi sought intervention from Trump, a close ally.

The turbine construction site at the Grand Ethiopian Renaissance Dam in December 2019. By EDUARDO SOTERAS (AFP/File)

The White House said that Trump on Friday spoke by telephone about the negotiations with Ethiopian Prime Minister Abiy Ahmed.

Trump "expressed optimism that an agreement on the Grand Ethiopian Renaissance Dam was near and would benefit all parties involved," the White House said in a statement.

Egypt, Ethiopia and Sudan have gone into overtime in often tense negotiations in Washington.

They had earlier set a deadline of January 15 before agreeing to seal the deal during a January 28-29 meeting, which wound up going two days longer than planned.

The Grand Ethiopian Renaissance Dam, near Guba in Ethiopia, in December 2019. By EDUARDO SOTERAS (AFP/File)

In the latest talks, the countries discussed setting up ways in which they can share information and resolve potential future disputes about the dam.

They also agreed to address dam safety standards and look further at the environmental and social impacts, according to the joint statement.

In earlier talks, the three countries said they had reached an understanding that Ethiopia would only fill the Grand Renaissance Dam during the rainy season and would base future water levels on conditions of the Nile.

The colossal 1.8-kilometer-long (1.1-mile-long) dam, under construction since 2011, is expected to begin generating power by the end of this year and eventually double Ethiopia's electricity.

The country expects the $4.2 billion hydroelectric barrage to be fully operational by 2022.

Abiy, whose democratic reforms won him the Nobel Peace Prize, has promised to cooperate with the other countries.

But Ethiopia has also made clear that it will insist on its rights to the water from the Nile.

The International Crisis Group, in a report last year, warned that the dam risked triggering violent conflict if it becomes operational without an agreement among the affected countries.