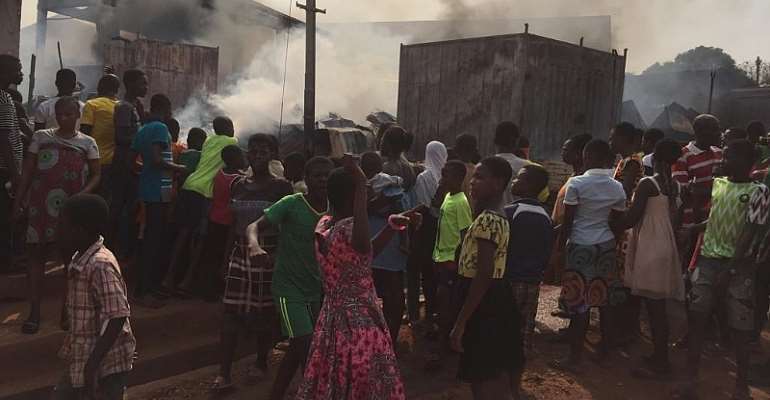 Two strange fire outbreaks in less than 24 hours at Yenyawoso, near Kumasi has destroyed multiple buildings.

The first fire which occurred around 6:30pm on Saturday; saw four rooms, laden with household items such as electrical appliances—being totally burnt, followed the next day, Sunday, by another around 2:30pm which gutted 15 wooden structures occupied by squatters.

The distance between the two fires was just 100 meters and the cause of which was being investigated at the time this report was being filed on Sunday afternoon.

Richard Karikari aka KK, who witnessed both strange fires, said “I had to call the fire service personnel to come and quench the blaze and help avert disaster.”

The fire fighters arrived at the scene on time on Saturday, and they managed to douse the blaze quickly, so just three rooms got burnt.

According to him, some household items, such as television sets, refrigerators, furniture and other electrical appliances were gutted by the blaze.

On both occasions, some people just saw a pall of smoke, emanating from a room, which suddenly developed into fire which quickly spread; the harmattan made it difficult for the fire fighters to control the fire.

When DAILY GUIDE visited the place on Sunday afternoon, most of the victims were seen shedding uncontrollable tears over their loss.

One of them, who only gave her name as Paulina, lamented that she had lost all her personal belongings to the fire and called for help from government.