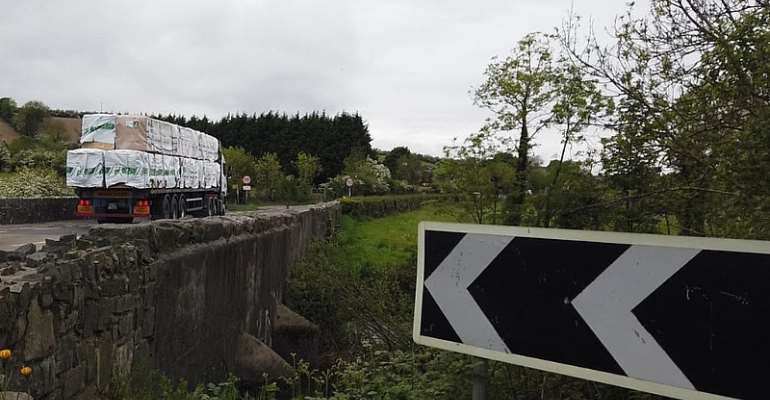 Every year, more than 800,000 trucks cross the waters between Northern Ireland and the rest of Great Britain. About half come from England and Scotland. A new border, projected in the North Channel between Ulster and the British mainland, could have disastrous repercussions for the road haulage sector.

“There is anxiety,” says Seamus Leheny, Policy Manager with the Freight and Transport Association (FTA).

He's just given a briefing to some twenty transport managers in the stately Clifton House in Belfast about what to expect from the looming Brexit.

“There were a lot of questions,” he muses.
Yet the people in the business “are not making too many statements yet about this, because they are unsure about what actual paperwork there will be.”

The “New Protocol on Ireland/Northern Ireland” which was presented to the European Council last October, amended the Withdrawal Agreement that was overwhelmingly voted into reality after Boris Johnson won a majority in parliament on 12 December.

Unlike Theresa May's “backstop,” which would have been UK-wide, the “Boris Protocol” applies only to Northern Ireland, creating a trade border between England/Scotland/Wales and Northern Ireland.

Health certificates
How will this work in practice? “Upon arrival into Belfast port, there would be some type of formalities,” says Leheny, as “the EU will treat goods coming into Belfast port like goods arriving in, for instance, Calais in France. There could be import declarations, pre-payment of tariffs or checks on goods, especially on goods of animal origin, like dairy produce and meat,” which have to meet EU standards.

“Companies may be required to produce health certificates and there could be restrictions on certain produce coming in here,” he says.

The Ireland Protocol states that goods moved into Northern Ireland require tariff payments upfront. But if a company can prove that the goods won't leave Northern Ireland, they can get a rebate.

But truckers are wary and the crucial negotiations have not even started yet.

“We want to make sure that drivers are not going to be sitting in a port, whether that is in Scotland or in Northern Ireland, waiting for hours to get released to continue on their journey,” says Leheny, pointing out that much is going to depend on goodwill from both London and Brussels.

Transport companies are also worried at the potential increase in their basic costs.

A lot of the logistics rely on “just-in-time deliveries,” a management system aimed at ultra-efficiency that can function properly only if there is no breakdown in the supply chain.

“So we can't afford additional cost, and we certainly can't afford any delays, and that's what probably gets people most anxious at the moment,” he says.

But there's good news too.
The Protocol promises a complete absence of border checks on the Irish island – between Northern Ireland and the Republic.

“The EU and the UK government have both listened to the concerns of Northern Ireland, both from people here from a civic background, from the academic and business communities, because cross-border supply chains are very important here,” says Leheny.

“What we make in Northern Ireland is usually comprised of ingredients found from all over the island, so if we had had a hard border in Ireland, those products we sell in England could have been jeopardised and not been able to be made anymore. There was a lot of anxiety there, because there is a huge number of trucks crossing the Irish border daily.

“And I think that would have had a major impact on the logistics on the island of Ireland, because it would have meant that people would have to stop driving their vehicle, to submit forms, or have loads checked.

"That's now changed, because any checks and forms submission will be done at the port, when vehicles are coming to a stop anyway,” he says.

Negotiations between the EU and London on a smooth transition to a possible new trade deal are due to start in February.