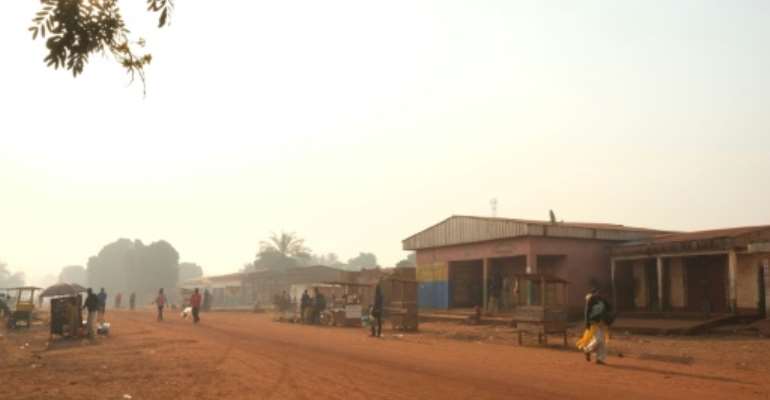 The dusty diamond trading hub of Bria has been ravaged by violence. By CAMILLE LAFFONT (AFP/File)

Bloodletting along ethnic lines in a key diamond town has highlighted the problems facing the Central African Republic in its struggle to dampen militia violence.

The clashes in Bria, northeastern CAR, left about 50 dead, according to the authorities -- the highest toll in the town since the government and 14 armed groups signed a peace pact last February 6, and aid workers there fear fighting will soon resume.

Bria is a flashpoint in a deeply poor and perennially unstable nation that has seen three civil wars in two decades. More than two-thirds of the country's territory lies in the hands of militias that often fight over minerals and other resources.

The fighting this time has exposed a split along ethnic lines within CAR's largest armed group, the Popular Front for the Rebirth of Central Africa (FPRC). 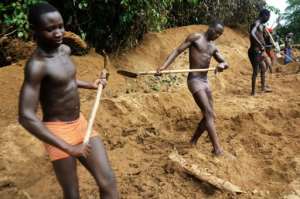 "We have pulled all our forces out of the district because we can't tell who's a friend and who's an enemy," said "General" Hussein Dambtocha, a supporter of Abdoulaye Hissene, a Runga who is the FPRC's military chief.

Even in peacetime, Bria is a political and economic muddle that is hard to decipher, with five armed groups.

The town is coveted because of the region's diamond-rich soil and its strategic location on trade routes to Sudan and South Sudan across the eastern border.

Militias collect taxes and administer daily justice with scant regard for the official authorities, who consist of a mayor, a prefect and a few soldiers with minimal equipment.

In Bria, ethnic tensions are manipulated -- as elsewhere in the CAR -- to serve the economic and political interests of warlords.

"The Gula control many mines around Bria," said a local diamond dealer

But "in town, most of the diamond trading counters belong to the Runga. These traders have established firm networks with foreign buyers, particularly Indian and Lebanese. This is one of the main reasons that have led to these tensions," he said.

Hans de Marie Heungoup, a researcher at the International Crisis Group think tank, added that the bustup in Bria "is a repercussion of events in Birao," a crossroads town in the northeast.

In July, the FPRC began fighting for control of Birao with the Movement of Central African Liberators for Justice (MLCJ), a Kara-affiliated group. The same month, the Kara signed an alliance with the Gula, the ethnic majority in Bria. 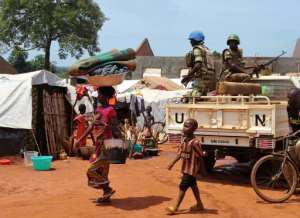 Bria is coveted by rebels because of the diamonds and its strategic location on a trade route. By SABER JENDOUBI (AFP/File)

Friction between the Runga and the Kara, who come from the neighbouring region of Vakaga further north, developed over the Runga's progressive control over levying taxes on goods at the Sudanese border, where many weapons are brought in.

Some Gula chiefs also consider themselves cheated by the Runga leadership of the FPRC. Now the knives are out.

Azor Khalit, a military man and former FPRC member who is also an influential leader in Bria, said the FPRC's strength "lay in the Kara and the Gula."

The Runga "don't like us, and yet we gave them our land," he said.

The FPRC is "today confronted with an existential challenge because part of its leadership doesn't belong to the same ethnic group as its fighters", said Heungoup.

Khalit notably introduced himself to AFP as the spokesman of the Party to Rally the Central African Nation (PRNC) -- an armed group that lies outside the national peace pact because it was created in May, three months after the accord was signed in Khartoum.

"(If the Runga) attack, we will defend ourselves," said Khalit. "You don't negotiate with these people. You neutralise them. You destroy them."