This Man Is Boastful, Vote Him Out! 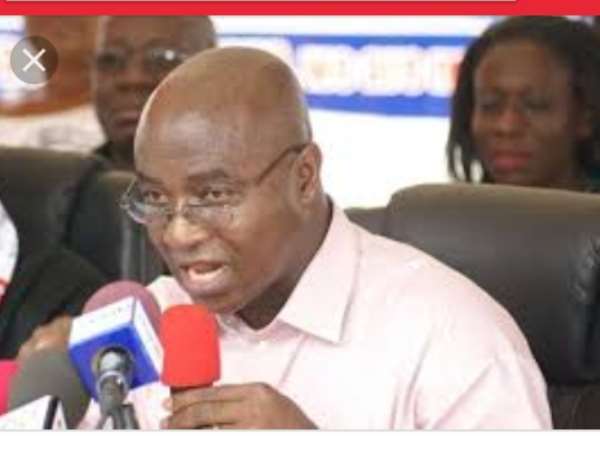 I'd last night (29/1/2020) watched with pains in my heart an interview granted the media by the Majority Leader in Parliament, who also doubles as the Member of Parliament for the Suame Constituency in the Ashanti Region, and the Minister for government business, Osei Kyei-Mensah Bonsu.

In the said interview, the Mr. Bonsu was asked by journalists to comment on his chances of returning to Parliament in the upcoming elections since he's been challenged fiercely by a young man in his constituency.

With a smirking air of invincibility, the Majority leader said; and I paraphrase: "what's the name of the guy who said he's coming to challenge me for my seat? Haha, he's just joking. Parliament needs people who work with their brains, brilliant intelligent people, to make laws. Parliament needs people who have stayed for long, we need experienced people there, as seen elsewhere in the developed countries........." (sic).

As if a sharpened iron blade was used to scrape my brains, I forced myself through an agonizing moment watching our majority leader on television. And he was not ashamed of his boastfulness one bit. He went on ranting till I picked my pen to answer him this way, albeit deserving of his - my boiled up anger.

Mr. Majority leader, the developed countries you cite for example to justify why you and your type are to be left go unchallenged, for God knows what number of years in Parliament, the Europes and the Americas, count what those long stayed parliamentarians have benefitted their representing constituencies and countries. Compare how developed their constituencies and the countries at large benefitted from the decisions that bear their signatures to that of Suame Constituency and Ghana, one that bears your thumbprint.

A Ghana of which Parliament your long stay you're comparing to the proverbial old wine that's priced highly, do put it on the same scale with the Chuck Schumers and the Nancy Pelosis in America's Parliament if your benefit to the old beautiful Ghana that was a pilgrim's pride will not be a fraction to theirs.

We're sick and tired of you using your long stay in Parliament to thumbscrew us always in electioneering period that you're the best for the country, and that aside you, no one else.

To wit: (He's to continue who has achieved the better).

Show to us the better you've achieved for Ghana in your two decades stay in the Parliament.

Have you not been in our Parliament that the very seating you occupy, not considering our local artisans, you contracted the Chinese to provide? The very Chinese who could build for the Africa Union's office in Addis Ababa, Ethiopia, and eavesdrop in on our presidents with bugging gadgets, they're the very ones you married to to dress the very Parliament you join to make laws for Ghana, opening our important arm of government to an espionage.

If they can do that, stealthily listening to decisions taken by leaders of the 54 and over countries, is Ghana safe, using anything of theirs at whatever place we sit, not even to talk about where we make our laws?

Or you think it is for nothing that America is banning Chinese Huawei's 5G network from its jurisdiction and urging all her allies to do same?

Mr. Leader of government's business, Osei Kyei-Mensah Bonus, you were in the same Parliament when the Chinese entered our country to mine our gold illegally, lumbering our priced rosewoods unabating to our disadvantage in business terms, and all sorts of their illegal activities reported done here.

Your acclaimed brilliance and intelligence I believe, is more strong in words and on paper, than its visible physical implementation.

If your other long stayed colleague in Hon. Alban Bagbin from the other side of the political divide is bowing out, learn to bury your pride and walk out the stage with the little applause accorded you. Don't use that your cliché silver bullet of "long stay the best" to stymie the patriotic young Ghanaians who are with the burning desire, filling all arms of government to erect again our fallen walls from the debris, and place Ghana at a vantage position in the NEW WORLD.

Arrest Any Chief Involved In Galamsey - NPP Communicator
8 minutes ago