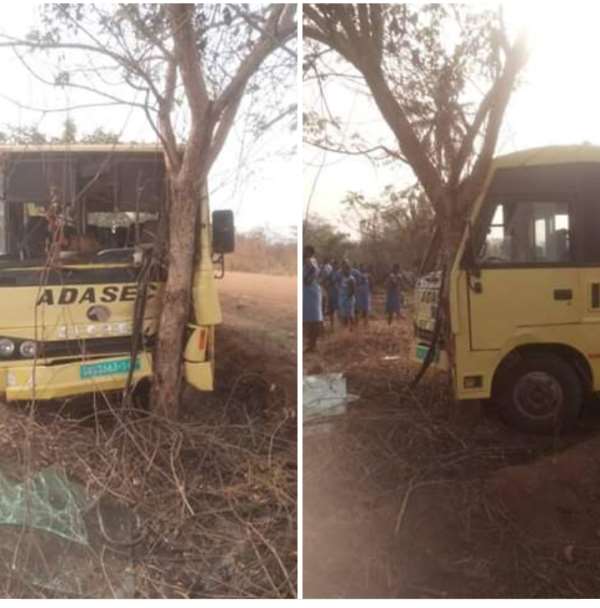 Some Staff and students of Adaklu SHS got involved in a near-fatal accident on the poor Abuadi–Waya road.

The incident which occurred when the school's contingent was returning to campus after participating in the 63rd National Independence Day inter-District competition held at Sokode Senior High Technical school (Ho) on 23rd January 2020.

There were no casualties according to reports from the accident scene.

Narrating the incident, a victim who was on board the vehicle stated that the steering wheel of the bus Miraculously got stuck and the brakes failed as well and If not for the high professionalism displayed by the school's celebrated driver, Mr. Emmanuel Ashilevi, lives would have been lost.

Upon hearing the news, The Headmaster of the School, Mr. Batholomew Hosu and the District Chief Executive (DCE) for the area, Hon. Phanuel Kadey Donkor, an active good friend of the school, rushed to the scene of the accident and conveyed them to the Adaklu Waya Health Center for treatment.

The School Prefect, Master Richard Sokpor bemoaned the fact that the school bus is the only means of transport for the school which is now damaged beyond repairs.

He, therefore, called on all stakeholders and government to come to the aid of the school in procuring a new, bigger and better bus for the school as the school is left with no means of transport for the students.