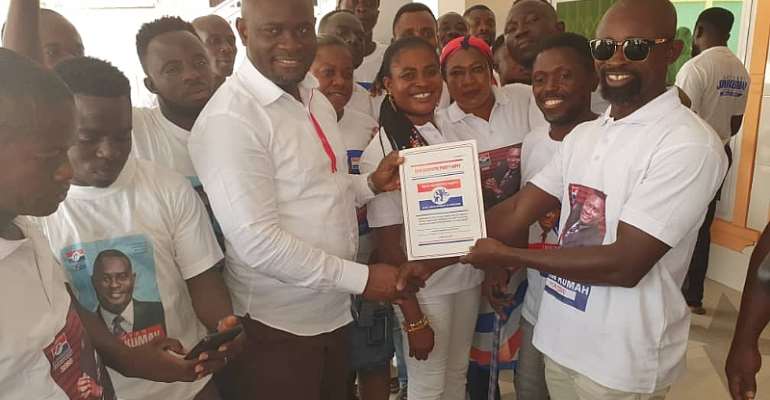 Some Delegates of the ruling New Patriotic Party (NPP) in the Ejisu Constituency of Ashanti Region have thrown their weight behind the Chief Executive Officer of National Entrepreneurship and Innovation Programme (NEIP), John Kumah as they throng the party's office to pick nomination forms to contest the upcoming Parliamentary primaries on April 25.

According to the delegates, the move demonstrates their level of confidence in the candidate.

Addressing the media, Assembly Member for Okyerekrom Kokoobra Electoral Area, Michael Nsowa Agyemang said "We appreciate his good works thus, the delegates numbering over 500 out of the 750 delegates in the constituency decided to pick up the Nomination Forms and presented it to him."

Mr. Agyemang who also doubles as a polling station Chairman and a Member of the Communication Team in the Constituency added that they were confident, the NEIP CEO will become their next Member of Parliament (MP).

He said “We know John Kumah. He is one of us and for the past few years, he has been working for the progress of the New Patriotic Party, Ejisu and Ghana."

Mr. Agyemang intimated that industrious people such as John Kumah have help brought development in the area, the reason they contributed among themselves to pick the nomination form even before he (John Kumah) thinks of doing that himself.

Receiving the nomination forms, the NEIP Boss, John Kumah said "I humbled by their action and didn’t expect this kind of euphoria to kick start my journey to becoming the next Member of Parliament for Ejisu."

He urged the supporters to ensure campaigns held are violent-free and also rally behind the agenda of retaining President Akufo-Addo in office for a second term.

The New Patriotic Party says it will on Saturday, February 15 2020, open nominations for Parliamentary Candidates in Constituencies.

Parliamentary Primaries in the various Constituencies are scheduled for Saturday, April 25, 2020 across the country.