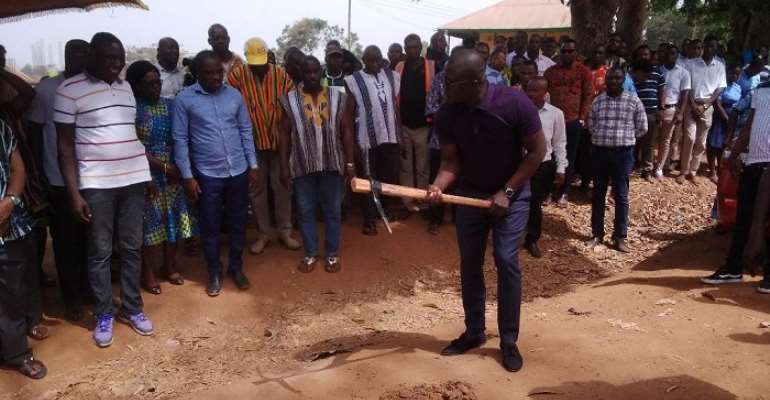 Bryan Acheampong digging the grounds as Nana Aseidu Agyemang, the DCE and others look on

The Member of Parliament (MP) of Abetifi Constituency, Bryan Acheampong, has cut the sod for the construction of an eight-kilometre road to link Abetifi to more than 10 communities in the Kwahu East District of the Eastern Region.

The roads which have been awarded to the feeder roads had been in a deplorable state for a very long time and are expected to be completed before the end of the year.

The MP, who doubles as the Minister of State in charge of National Security, said roads make a crucial contribution “to economic development and growth and they bring important social benefits. Road infrastructure is one of the most important of all public assets.”

He also said he would do everything possible to begin the construction of the Abetifi Hospital which was given on contract by the NDC government, but the money used for something else.

The Abetifi chief, Nana Aseidu Agyemang III, expressed gratitude to President Akufo-Addo for listening to their cry by making the project a reality.

He also commended the MP for pushing for 16 roads to be constructed in the constituency, which he said would open up economic activities.