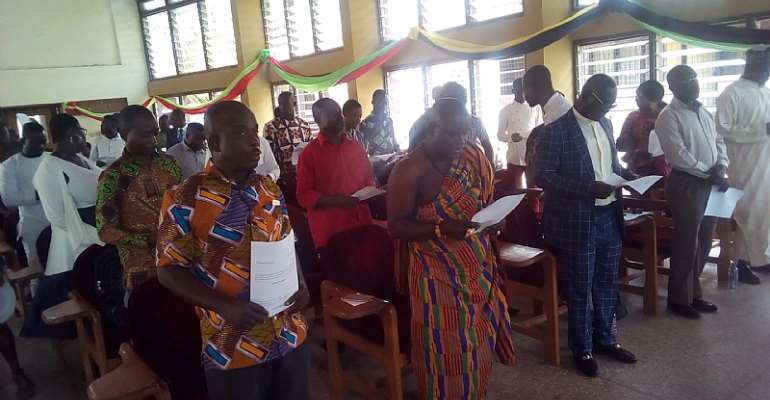 The Berekun East Municipal Assembly has successfully been inaugurated at the Assembly’s conference hall at Berekum in the Bono region. The 38 Assembly Members made up of 26 elected and 12 appointed took the official Oath and the Oath of Allegiance administered by the Berekum District Court judge.

Mr. Kofi Adjei was full f praise for the Berekum Traditional Council and the people of Berekum for the co-operation and support over the years. He also congratulated them for electing their Assembly and Unit Committee members in a peaceful manner. The Municipal Chief Executive also thanked members of the sixth Assembly for service to the Assembly and urged members of the seventh Assembly to close their ranks and work towards the interest and development of the Assembly.

In an inaugural address read on his behalf by the Deputy Bono Regional Minister, Mr. Siaka Steven, the President of the Republic, Nana Addo Dankwa Akufo-Addo thanked all invited guest to the inaugural ceremony of the Assembly and emphasized the importance of the ceremony to decentralization and local governance. He cited Article 35 clause 6(d) which enjoins the State to promote popular participation in governance through decentralizing the administrative and financial machinery of government to the regions and districts in order to afford people to participate in the decision-making process at all levels of national life and governance.

The Deputy Regional Minister charged the Assembly to advance the implementation of Government Co-ordinated Programme of Economic and Social Development Policies 2017-2024. He mentioned a number of policies and programmes being pursued by government to alleviate the plight of Ghanaians like the “One District, One Factory”, programme, Planting for Food and Jobs, Planting for Export and Rural Development, One Village, One Dam, amongst many other.

However, the contest between the incumbent, Mr. Joseph Baffour Awuah and Mad. Hajia Fati Abubakar failed to produce a Presiding Member for the Assembly as none of them was able to secure a two-thirds majority. In the first and second rounds of voting organized by the Electoral Commission, Mr. Joseph Baffour Awuah polled 26 and 25 votes while Mad. Hajia Fati Abubakar polled 12 and 13 votes respectively.

In his closing remarks, the Chairman for the occasion, Osabarima Oteng Adjei, Tufuhene of the Berekum Traditional Area charged the Assembly Members to always work towards achieving the interest of the Assembly above their personal interest. He expressed the hope that the Assembly will be able to elect a Presiding member in its next sitting.