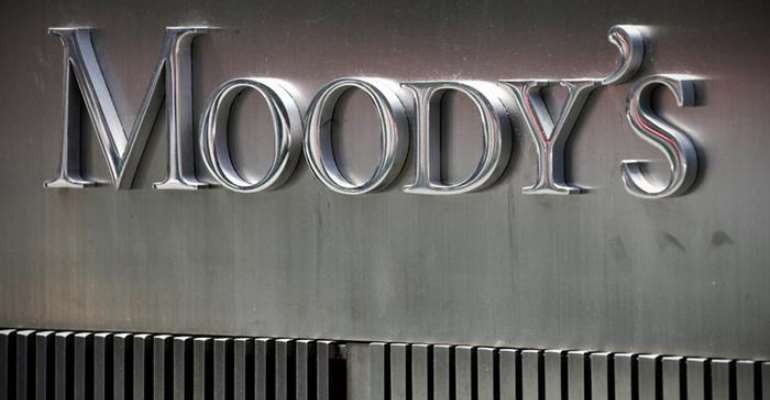 It has also changed the outlook of Ghana from stable to positive.

The decisions were announced in a statement issued by Moody’s in New York on January 24, 2020.

According to the statement, Moody’s has concurrently affirmed the rating of the bond enhanced by a partial guarantee from the International Development Association (IDA, Aaa stable) at B1.

The decision to assign a positive outlook, the statement noted, reflects Moody’s rising confidence that the country’s institutions and policy settings will foster improved macroeconomic and fiscal stability over the medium term, in part as a consequence of the reforms implemented under the recent IMF reform program.

It added that “those reforms are beginning to bear fruit, as seen for example in the return to primary fiscal surpluses, measures to smooth the debt maturity profile and increasingly sustainable growth prospects.”

” Pressures and risks remain, as evidenced by persistent revenue challenges, a potential repeat of pre-election fiscal cycles, and the emergence of significant arrears and further contingent liabilities in the energy sector, all contributing to rising public debt,” it said.

It stated that the positive outlook reflects increasing confidence that the government will manage those pressures in such a way as to sustain and enhance external and fiscal stability.

The decision to affirm the B3 rating balances, for now, those positive medium-term trends and existing challenges, it added.

The statement however indicated that a key constraint on the rating is the country’s significant exposure to international capital flow reversals, which tend to coincide with exchange rate volatility and rising external and domestic borrowing costs, putting pressure on already weak debt affordability.

” Measures which reduce that exposure by demonstrating reliable liquidity risk management and increasingly firm control over the debt position would support an upgrade to a B2 rating,” it said.

“However, those measures will take time to evidence impact. As a consequence, the outlook is unlikely to be resolved quickly and may even extend beyond the usual 18 month period in order to monitor how policy unfolds following the forthcoming election, and in particular the government’s progress in implementing its energy recovery strategy.”

Giving the rationale behind the rating, the statement explained that for some time, Ghana’s rating has been constrained by two related factors.

First, by the challenges its policymaking institutions have experienced in establishing a consistent set of policies which support macroeconomic and financial stability, and which survive changes of government. Second, by the high level of external commercial debt holdings which, taken alongside limited net foreign exchange reserves, exposes the government and the balance of payments to a loss of international investors’ confidence in policymakers’ ability to sustain economic and financial stability, raising the risk of a fiscal and/or balance of payments crisis, it said.

However, it noted, in recent years Ghana has seen a number of positive developments in key credit metrics, which partly reflect the institutional and fiscal reforms implemented under the four-year IMF program that was completed in April 2019.

According to the statement, these include a return to sustained economic growth at around 5% on average, supported by the development of domestic hydrocarbon resources and the prospect of sustained non-oil growth driven by the restoration of power supply and renewed infrastructure investment, a structural improvement in the current account dynamics, and fiscal reforms which have resulted in primary surpluses since 2017.

“Moody’s expects a similar outcome this year and a renewed shift to fiscal consolidation following the election,” it said.

Beyond the fiscal sphere, it added, measures taken over the past couple of years to recapitalize the financial sector and to address the country’s power deficit (albeit the latter with problematic unintended consequences) also suggest active, moderately effective policymaking and support rising confidence in policymakers’ ability to sustain economic and financial stability, and to limit the risk of external shocks in the coming years.

Nevertheless, challenges remain, alongside developments which suggest that the roots of the institutional reforms are, for now at least, shallow, it said.

The rise in deficits in 2019 as the election approaches, as in past cycles, suggests a high likelihood that the usual pre-election fiscal stimulus will emerge in 2020, the statement noted.

Fiscal targets have been achieved in part by recording as ‘below the line’ items fiscal costs relating to the recapitalization of the banking sector and to energy legacy debts which have caused the overall debt burden to continue to rise, it said.

The government is contemplating issuing additional, ‘collateralised’, debt to support investment in bauxite refining in part to absorb surplus energy.

As a result, the debt burden has risen by nearly ten percentage points of GDP since 2017, in part as a consequence of the financial sector bailout in 2018-19 and the measures taken to clear legacy power utility debts (estimated at 4.5% and 2% of GDP, respectively). Estimated at around 64% of GDP at end-2019, it is expected to rise further over the near term.

How far and for how long it rises will depend in part on the government’s success in preserving exchange rate stability and in dealing with additional contingent liabilities arising in the energy sector, it said.

Those contingent liabilities arose from the agreement of ‘take or pay’ contracts with energy producers extending until 2023, which were entered as part of the measures taken to address the acute power shortages experienced earlier in the decade.

‘There Won’t Be Conflict After December Elections’ – Akufo-A...
44 minutes ago

Add Us To Bank Customers You Want To Settle – Menzgold Custo...
44 minutes ago