Corruption in South Africa: echoes of leaders who plundered their countries 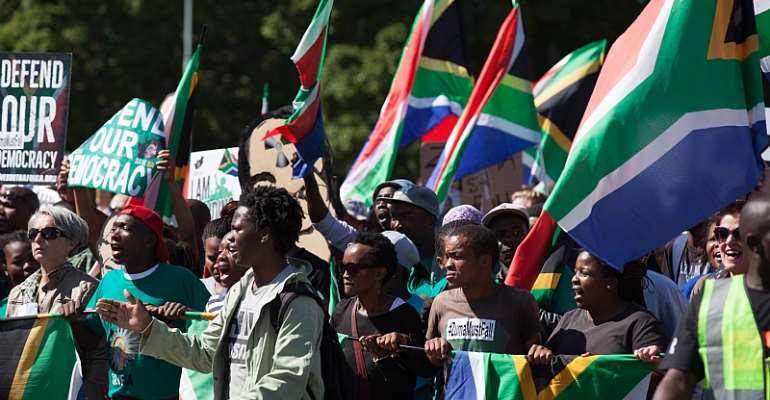 One of the shameful achievements of the African National Congress (ANC) in its 25 years of governing post-apartheid South Africa is that it's living up to the political stereotype of what is wrong with post-colonial Africa – unethical and corrupt African leaders who exercise power through patronage.

The widespread corruption in post-apartheid South Africa is epitomised by what is now referred to as “state capture”. The effects of the entrenched corruption are exemplified by frequent power cuts devastating the economy. Another example is the government's failure to keep the trains running.

Democratic South Africa appears to have morphed into a fully fledged predatory state. The lobby group Corruption Watch reported last year that more than half of all South Africans think corruption is getting worse. They also think the government is doing a bad job at tackling corruption.

Characteristics include using public office and resources to promote the private interests of ANC politicians and those connected to them. It also includes an entrenched culture of being untouchable.

Events in South Africa have echoes in countries across the continent. These range from the Dos Santos family in Angola to Mobutu Sese Seko's decades of thieving in Zaire. Mobutu is credited with the invention of modern African kleptocracy.

Of course, African leaders are not the only corrupt political leaders in the world. For example, Noah Bookbinder, a former trial attorney for the US Justice Department's Public Integrity Section, recently argued that US president Donald Trump's

increasingly egregious abuses made 2019 one of the most corrupt years in US history.

But the fact of the matter is that sub-Saharan Africa is in a league of its own. In the 2018 Corruption Perception Index, published by Transparency International, it appears at the bottom. The report released with the index stated that the region had “failed to translate its anti-corruption commitments into any real progress”. In 2019, the region again appears at the bottom. Transparency International remarked:

The ANC once represented a political tradition of opposition to apartheid rooted in altruism. But the events that have unfolded since it took over running the government in 1994 suggest that it has become a corrupt machine.

It seems the party appears intent on following in the footsteps of the likes of the late Mobutu.

State corruption has taken hold with utter disregard for ethics and democratic norms in a cynical exploitation of the post-apartheid transformation agenda. For example, large-scale corruption is often framed around the liberation struggle rhetoric of empowering black people.

The reality is that the black elite enrich themselves and their families through government tenders and other questionable and unethical means.

Former president Jacob Zuma is the “poster boy” for this black kleptocracy. He and his associates, the Gupta family, captured the post-apartheid state with the sole purpose of exercising power to shape policy making, and to control political institutions to their own advantage.

Dishonest politics has become a defining feature of post-apartheid politics while the legitimate fight against corruption is being made analogous to racism. It is a politics that is characterised by lack of ethics, morals, and logic, and has no legitimate place in a democratic society.

Yet it continues to trickle down to other societal institutions. Transport minister Fikile Mbalula recently described the Passenger Rail Agency of the country as a

Meanwhile, South African Airways has been forced into a voluntary business rescue after its working capital dried up and the national treasury refused another bailout.

Of course, the private sector is not corruption free. Corporate businesses that have been associated with state capture include Deloitte, McKinsey, KPMG, Bain & Company.

The breakdown in social order reveals a dysfunctional political system that rewards sycophants, con artists, thugs, greed, and antisocial attributes. The development of this patronage network is the product of the ANC's cadre deployment policy. This values party membership over ability and probity.

Lessons from history not learnt

The history of democratic South Africa shows that the ANC has failed to learn from the experiences of post-colonial Africa, and thus avoid its unsavoury parts.

Instead, it has chosen to walk in the footsteps of other corrupt post-colonial African leaders. Small wonder that its frustrated citizens have turned to the courts to force the government to govern in their interests.

The latest example of this the Makhanda High Court ruling that the Makana Municipality be dissolved and placed under administration for failing to carry out its constitutional obligations to its citizens. The court found that the ANC-run municipality had failed to “promote a healthy and sustainable environment for the community”, as required by the country's constitution.

More such political collisions between the country's cherished democratic norms and the corrupt post-colonial political elites are needed to change the current political trajectory of corruption and incompetence. That is the only antidote.

Mandisi Majavu does not work for, consult, own shares in or receive funding from any company or organisation that would benefit from this article, and has disclosed no relevant affiliations beyond their academic appointment.