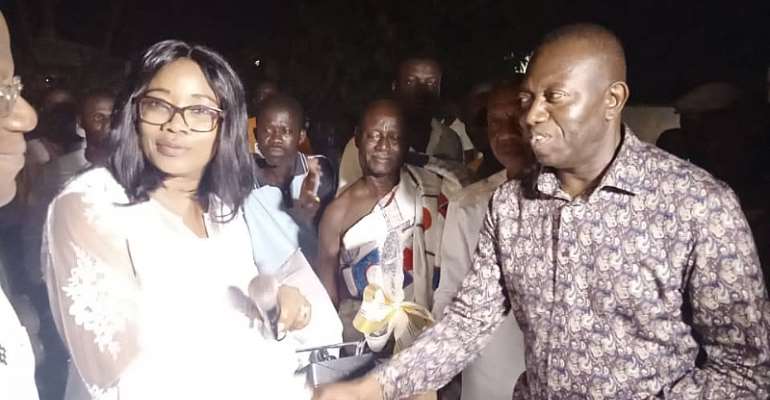 Minister for Gender, Children and Social Protection, Hon. Mrs. Cynthia Mamle Morrison has donated three (3) motorbikes to Swedru Divisional Command of the Ghana Police Service, a Tricycle Motorbike to Transport Unions in Agona Swedru and a Fire Attack Line to Personnel of the Swedru District of the Ghana National Fire Service to enhance their operations.

The presentation which coincided with the MP's Birthday was to help improve security in the Agona West Municipality, enhance effective waste management at lorry stations that have been engulfed with filth and also improve efficiency in terms of fighting fire outbreaks.

Presenting the items to the beneficiary institutions at Agona Swedru on Saturday, Hon. Cynthia Morrison noted that the donations were to support the institutions to facilitate their operations effectively.

Though Security situation is not all that bad, the police ought to be equipped to boost their daily activities especially in the night

The Tricycle Motorbike will also go a long way to improve sanitation in Agona Swedru and its environment.

It saddens my heart whenever I see Filth scattered all over our main lorry stations. This has become a source of worry because Agona Swedru is a transit place for commuters who find it easier passing through Swedru to their various destinations.

They complain daily about filthy nature of the stations being operated by GPRTU, PROTOA and Cooperative Driver's Unions.

It is my hope that the Tricycle Motorbike will be used judiciously to improve Sanitation situation in our lorry stations.

The Agona West Member of Parliament expressed the hope that the beneficiary institutions will take proper take care of the Machines and use them judiciously to serve the purpose for which they were given adding her office was opened for support of any kind needed to enhance their operations.

"I am of a strong conviction that Agona West Constituency will succeed and major uncompleted projects under my auspices will be completed to facilitate the development of the Municipality" Hon. Cynthia Mamle Morrison noted

The Agona Swedru Divisional Commander of the Ghana Police Service, Assistant Commissioner of Police ( ACP), Mr. Samuel Yankey who received the Three motorbikes on behalf of the police lauded Honourable Cynthia Morrison for the donation pledging that the motorbikes would be put into judicious use while proper culture of maintenance would be kept to last longer than expected.

The Police Commander calls on Philanthropist, NGOs, Churches and cooperates bodies to emulate what Hon. Cynthia Morrison has done to support them accordingly.

Leaders of the various Transport Unions in Agona Swedru also expressed their appreciation to Hon. Cynthia Morrison for her kind gesture

In a related development, Minister for Gender, Children and Social Protection, Hon Mrs.Cynthia Mamle Morrison has appealed to parents to take proper care of their Disabled Children urging them to send them to school.

Addressing the Chiefs and People of Oteiprow to climax their annual Akwambo Festival last the weekend, Hon. Cynthia Morrison who is also the Member of Parliament for Agona West entreat the people to take advantage of Government's programmes and policies to better themselves.

"I have particular interest for Persons With Disabilities especially the children. We must not hide them in our rooms but to expose them to the general public. They must enjoy formal education.

They are part and parcel of society. We shouldn't discriminate against them simply because they are Disabled"

She assured the people that the local Basic School would in the community soon benefit from the School Feeding Programme.

Chief of Oteiprow, Nana Osompa Nyamekye II praised the MP for the number of development projects she was undertaking for the people in the Area.