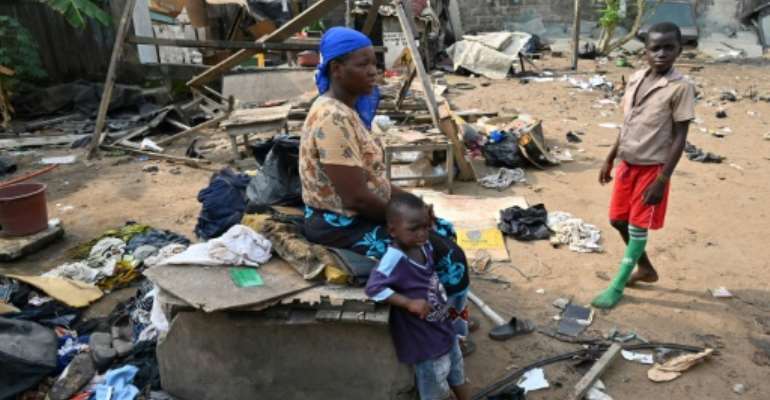 Residents of Adjouffou prepare to leave their homes -- part of the area is being razed to make way for a buffer zone around the airport. By ISSOUF SANOGO (AFP)

Inhabitants of a shanty town adjoining Ivory Coast's main airport have had to leave their homes, their possessions hastily packed into suitcases, wheelbarrows and bags, after officials decided to bulldoze part of the area as a security measure.

Authorities vowed to make a buffer zone around Abidjan airport after an Ivorian boy was found dead in the landing gear of a passenger jet at Paris' Charles de Gaulle airport on January 8.

Inquiries found the 14-year-old had scaled a fence and grabbed hold of the plane's undercarriage as it was readying for takeoff to Paris.

Adjouffou, a settlement of some 25,000 inhabitants, was partially evacuated on Monday to make way for a security strip of 200 metres (650 feet) around the airport enclosure.

The shanty town lies on the airport's right-of-way and all the land belongs to the state.

"This is no good. We have nothing. What are we to do now? Look at my Dad," cried Aicha Sawadogo, 14, as her father gathered the last things from their home, made of cardboard and pieces of wood.

"When we were young, we crossed the runway to grow cassava or mangoes," said Abdul Ouattara, 41.

"We have always been here. There are schools, shops, churches and mosques."

Francis Kablan, a truck driver with nine mouths to feed, helped a neighbour to lift the roof off his shack.

"I'm here because I don't know where to go. We've stashed our things with my wife's family."

A man removes the roof of his house in Adjouffou. Authorities announced the security perimeter after a 14-year-old boy scaled a fence to climb onto the landing gear of a departing jetliner -- his tragic death also triggered a security alert. By ISSOUF SANOGO (AFP)

He added: "I was born here, lived here for 40 years. There used to be no wall, we could see the aircraft. There was never any problem."

The death of young Laurent Barthelemy Ani Guibahi touched many people in Ivory Coast but also triggered alarm over security at the airport.

Ivory Coast is on the periphery of jihadist terror attacks mostly affecting its northern neighbours Mali and Burkina Faso.

Sites for those being expelled from their homes are being considered, Hamed Diomande, chief of staff to the minister of transport, said last week.